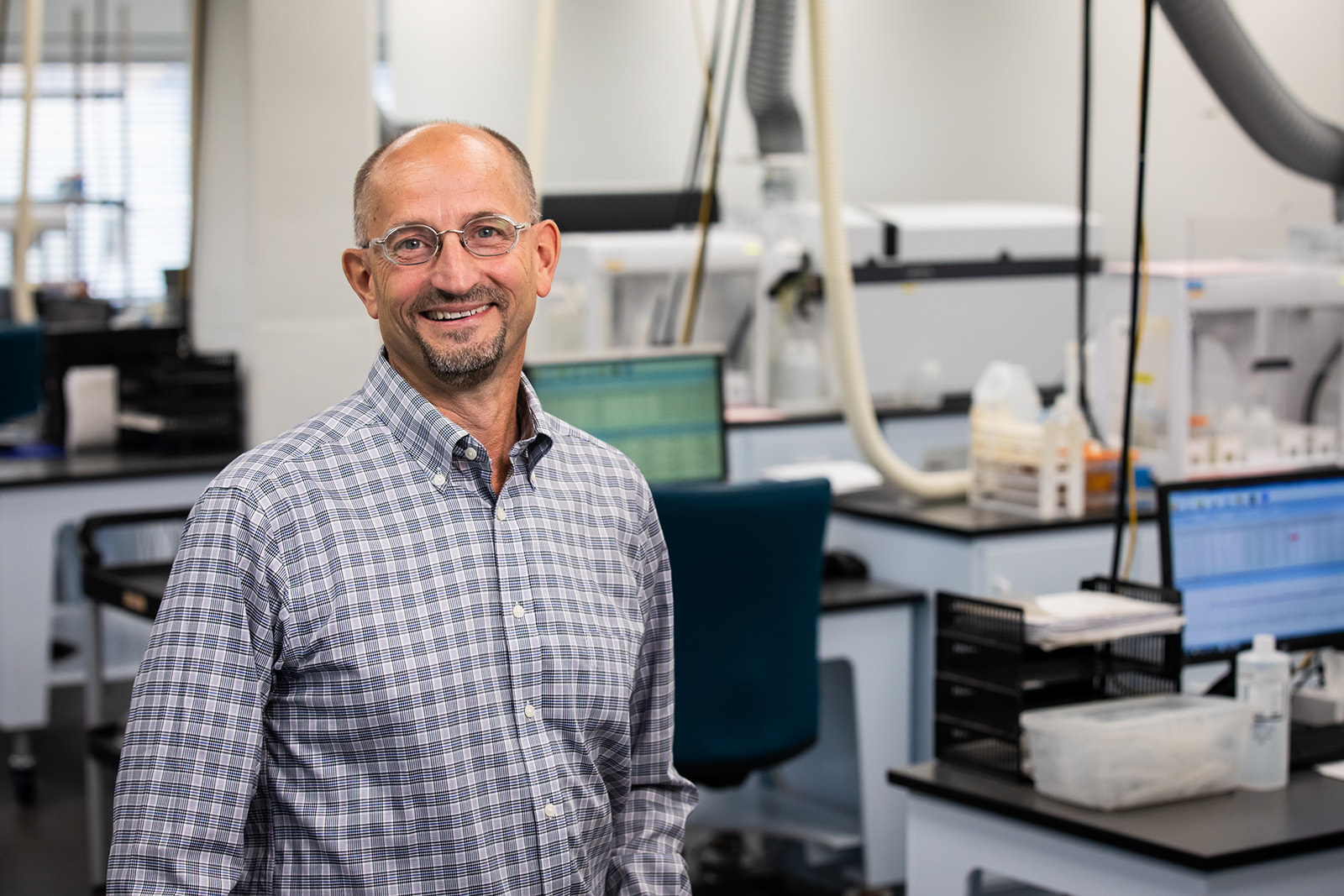 When talking to employees at SRC, one commonality among many is their long-standing careers with SRC. Jeff Zimmer, manager of SRC Environmental Analytical Laboratories, is no exception as he started his career with SRC 36 years ago!

Through his tenure at SRC, Jeff has held various positions within the lab. He started his career in 1985 as a lab tech in the radiochemistry area.  After a few years he started working in the Radiocarbon Dating lab, eventually running that laboratory. Familiarity with radiation and radioactivity, led to a secondary role as the Radiation Safety Officer for SRC.

As the lab expanded, there was a push to have additional quality assurance measures and SRC created a new position which Jeff accepted and later, he was promoted to a supervisory role. “As time went on, the lab grew, and I transitioned from the Quality Assurance Supervisor to supervising the inorganic chemistry section. My position eventually grew to include supervising the radiochemistry section as well and ultimately, I became the manager of SRC Environmental Analytical Laboratories,” says Jeff.

Over his career at SRC, Jeff earned his Bachelor of Chemistry degree, as well as a Business Administration Certificate from the University of Saskatchewan.

SRC Environmental Analytical Laboratories is one of Canada’s most complete analytical chemistry laboratories offering environmental test services and expertise in organics, inorganics and radiochemistry. Environmental samples, such as soil, water, vegetation, fish and other biota are analyzed primarily for chemical or radiochemical contaminants.

“The lab can perform three to four thousand different types of tests and generates between 500,000 and 1,000,000 individual test results every year,” says Jeff.

Licensing is an important aspect of the lab’s work. “We can identify radium, thorium and polonium, which typically can’t be tested at other laboratories without proper licensing,” Jeff says. “To handle or even accept samples that have elevated levels of radioactivity, requirements set by regulatory agencies must be met.”

Jeff explains that clients will come to SRC with certain problems and need solutions and sometimes those solutions will require the team to think outside the box. “Recently, a company that produces radiopharmaceuticals needed specialized testing as their products would be administered to humans. Our team created the protocols necessary to safely conduct tests on their highly radioactive product to determine if there were any trace metal contaminants present which is necessary for their certification from Health Canada.” 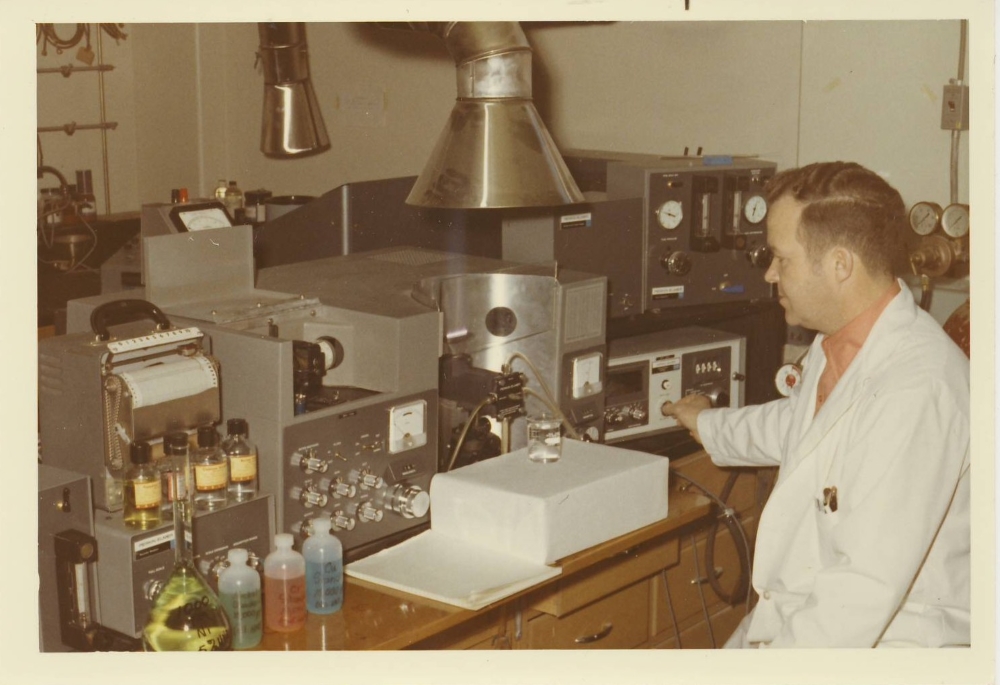 History of the Lab

SRC Environmental Analytical Laboratories began in 1958 as the potash industry in Saskatchewan needed specialized testing services. In the 1970s, as the uranium mining industry grew and more specialized testing was needed, SRC expanded its services. Originally, the lab was located on the University of Saskatchewan’s campus in Saskatoon but moved in the early 1980s to the Innovation Place research park. The lab was also the home to SRC’s SLOWPOKE-2 nuclear research reactor, which operated safely at SRC for nearly 40 years and is currently being decommissioned.

In 2018, the lab went through a big move to its current location at the Atrium building at Innovation Place. ”Moving an entire laboratory filled with specialized equipment was a complicated project,” says Jeff. “It was a learning experience in the logistics of moving and setting up a lab.” Now in its new location, the lab branched off to include agriculture genetics testing. Recently, the lab has focused on growing its cannabis testing capabilities. 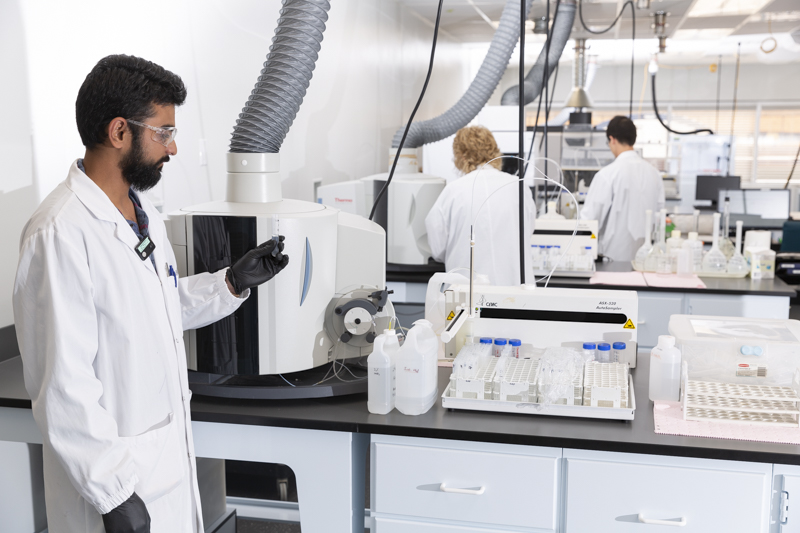 Over time, as new industries bloomed in Saskatchewan, SRC was there to help them get started. “The uranium and potash industries both needed certain testing services created that were unique to their industries,” says Jeff. In both cases, the lab was able to develop services and offered these services back to the industries, enabling them to keep work right here in Saskatchewan.

The success of the lab over the last six decades comes down to the people who work in it. “Our employees are very dedicated to their jobs. They like what they do, show up for their team every day and see that their contributions are making an impact,” says Jeff.

Jeff and his team enjoy that there’s always an array of projects on the go from various industries, allowing employees the ability to work with different equipment to keep their work challenging and interesting.

The Best Part(s) of Working at SRC

“I enjoy working with clients to provide them the unique services they require for their projects and to assist them in solving problems,” says Jeff.

He also feels that respect, which is a core value at SRC, is supported through work-life balance. For Jeff, who has spent his entire career at SRC, there’ve been many times when work-life balance was needed, such as going to one of his children’s plays at school. His team always arranged to make it happen and that balance is something he encourages in his staff. “It’s what makes SRC such a great organization,” he says.

Over the years, Jeff has had the opportunity to work on many exciting and innovative projects such as operating the SLOWPOKE-2 reactor, teaching radiation safety and developing new and innovative tests for clients. Working in the radiocarbon dating lab was always very interesting because of the background stories of the geological and archeological artifacts submitted.

“We did a lot of whalebone samples. We would be sent a sample of whalebones from areas in the Arctic, such as Baffin Island, and analyze the bones to determine their age,” recalls Jeff. “With these dates, the researchers submitting the samples could map out the coastline of the island thousands of years earlier.”

Careers, like Jeff’s, that span more than three decades, but with opportunities to grow, is an indicator of the type of workplace SRC is and the type of people who make up the teams. “The work at SRC is always challenging,” says Jeff. “And those challenges keep the work interesting.”

Learn more about SRC Environmental Analytical Laboratories and check out some of the blog posts Jeff has written about their work.

This post was written by former SRC employee Erin Shawaga.