Building a Hydrogen Hub on the Prairies 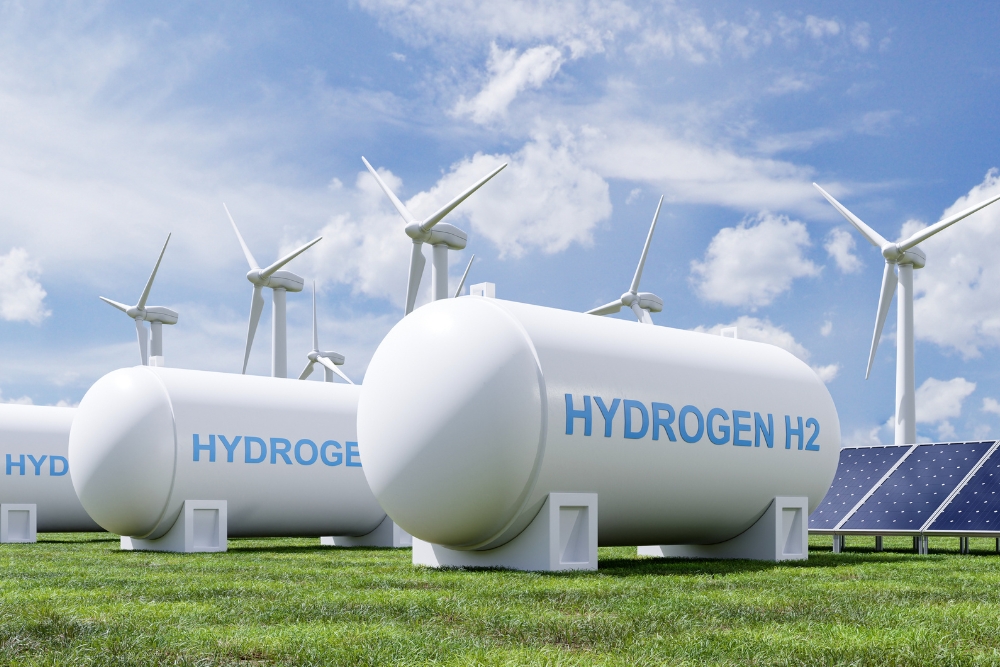 Saskatchewan is poised to be a leader in Canada’s energy transition.

The province’s established oil and gas industry is crucial for diversifying the energy sector and providing solutions that work for the economy and the environment. With over 30 years of industry knowledge and expertise, SRC is supporting the province as it turns its attention towards hydrogen.

“There are a lot of great things about hydrogen, and we are excited about hydrogen as part of the energy transition,” says Petro Nakutnyy, Director of Operations for SRC’s Enhanced Oil Recovery (EOR) and In-Situ Processes team.

Hydrogen is a colourless, odourless gas that produces little to no emissions during its use. When used as a fuel, hydrogen combines with oxygen and gives off water or vapour as its by-product—making it an ideal candidate for a variety of energy needs.

Hydrogen can be combusted and used similarly to natural gas, diesel or gasoline, for example in heating and transportation applications. Hydrogen can also be used in a fuel cell to produce electricity. Fuel cell applications are more efficient, but the ability to use hydrogen in internal combustion engines makes it a versatile transition fuel for heavy duty transportation.

Since hydrogen doesn’t exist freely on Earth, it must be created and can be produced through several processes. In Canada and in Saskatchewan, hydrogen is currently produced from natural gas, but it can also be made from electrolysis or water splitting, which produces hydrogen from water. Its versatility in both production and end-use applications makes it an attractive fuel alternative.

“The multiple production pathways for hydrogen make it is a more versatile option for energy transition,” says Nakutnyy. “In some regions of the world where gas supplies are prevalent, hydrogen can be produced from natural gas, and combined with carbon capture which allows us to reduce our greenhouse gas emissions significantly right away.”

In other regions with a different energy mix a larger portion of hydrogen is expected to be produced by electrolysis.

Hydrogen in the spotlight

International interest in hydrogen has grown over the last couple of years. Canada has developed its own ambitious hydrogen strategy that recognizes the potential of hydrogen for environmental stewardship and economic growth within the energy sector.

Net-zero goals will require a multitude of different solutions and hydrogen alone will not provide all our energy needs. However, as the world moves towards net zero, there are many industries that will be challenging to transition to electricity.

After decades of developing technologies that use hydrogen, SRC has the knowledge and expertise to assist Saskatchewan with its energy expansion.

“I think the best contribution we made was the microprocessor that could adapt gasoline and diesel vehicles to hydrogen,” says Mike Sulatisky, a research advisor with SRC’s Process Development team.

In 2004, SRC produced the first Dual-FuelTM diesel-hydrogen vehicle. This was followed by the first hydrogen-gasoline vehicle in 2005. At its height, the project featured a fleet of hydrogen hybrid vehicles. In 2010, a hydrogen fuelling station was established to support these vehicles.

“We advanced the development of a new fuelling system, which allowed us to blend gaseous hydrogen into vehicles along with normal gasoline, and subsequently trademarked dual-fuel technology,” says Anton Farber, a research engineer on SRC’s Development Engineering and Manufacturing team. “The control system development and vehicle conversion were completed in-house at SRC.”

These vehicle technologies reduced emissions anywhere from 40 to 60 per cent during routine driving conditions. The vehicles could idle on 100 per cent hydrogen, releasing only water vapour from the exhaust, which further reduced overall emissions.

SRC also developed leakage detection technology that used acoustics and ultrasonics to detect weaknesses within a high-pressure container before a leak could occur. Since hydrogen must be kept under very high pressure, this technology provided a valuable safety application.

The hydrogen vehicle project at SRC was a bit ahead of its time and the challenges in producing and storing hydrogen economically at scale were difficult to overcome. However, in recent years, the cost of producing, storing and working with hydrogen has come down and is expected to further decrease over the next decade.

“Today hydrogen use can be economic on its own merits, in addition to the environmental benefits of converting some applications to hydrogen,” says Nakutnyy.

Hydrogen continues to pose some challenges for producers and users. To store a sufficient amount of energy in hydrogen, the gas needs to be kept under high pressure, which requires specially designed containers. Liquefying hydrogen is one solution, but the liquefaction process is not easy. It requires a lot of energy, and the liquid hydrogen needs to be kept at minus 250 Celsius.

SRC is also looking at complementary technologies like micro-small modular reactors to support generation and scenarios that involve using ammonia offers a potential solution as a hydrogen carrier. Another option that could be explored is storage in metal hydride alloys that use rare earth elements like the lanthanum that will be refined in SRC’s Rare Earth Processing Facility.

The creation of hydrogen hubs could help mitigate some of these challenges. The unique geological landscape and the expertise of the province's established energy industry make Saskatchewan an attractive location for this kind of hydrogen network. 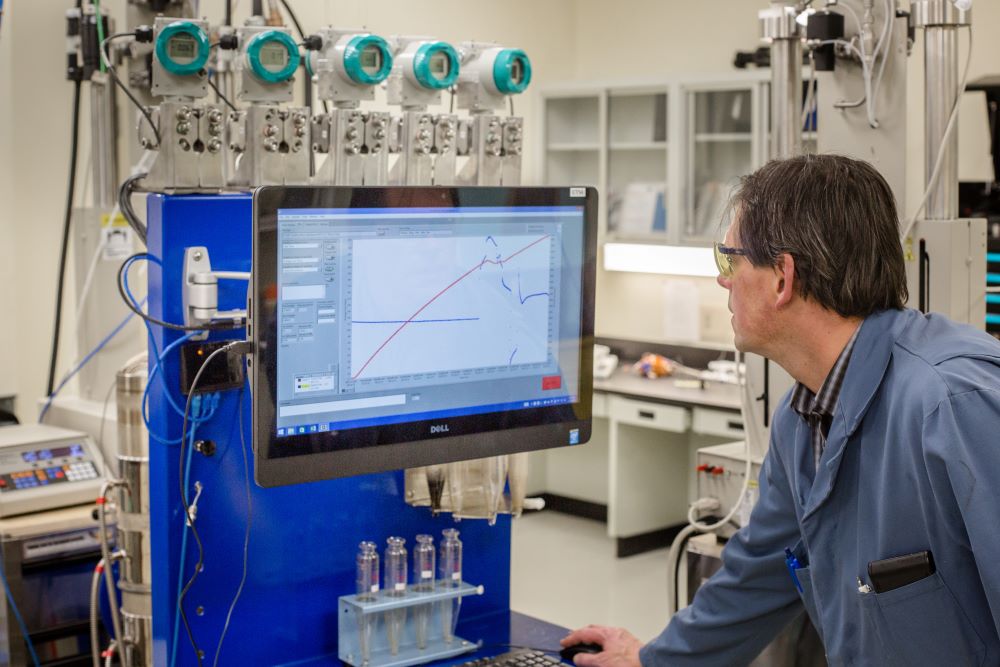 SRC is working closely with experts from the Transition Accelerator and the University of Regina, with support from the Ministry of Energy and Resources and industry partners—including Federated Co-operatives Limited and Whitecap Resources—to assess the feasibility of a hydrogen hub and synergies with carbon capture, utilization and storage (CCUS) infrastructure in the Regina-Moose Jaw industrial corridor.

Collaboration is key to the success of a hydrogen hub.

“Having stakeholders throughout the whole value chain, working together to create demand and ensuring that it’s met with more local production, is important,” says Dwayne Pattison, Business Intelligence Analyst at SRC.

Saskatchewan's oil and gas and mining industries both play a significant role in establishing a hydrogen hub. Their expertise and existing infrastructure are invaluable in growing a new hydrogen economy in the province.

Large underground cavities that are used to contain natural gas are located across the province.  They may be opportunities to leverage local geological formations, including salt caverns for hydrogen storage as well.

The future of hydrogen in Saskatchewan

Hydrogen can address many of Saskatchewan’s needs while using its established infrastructure. Currently, most of the province’s energy comes from natural gas.

“We can use the industries that we have and retool some of it to produce hydrogen, therefore reducing emissions and creating an environment that would then allow further growth of hydrogen use,” says Nakutnyy.

This strategy would provide a transition period where the people, skills and infrastructure in Saskatchewan can be used to continue supplying clean and inexpensive energy while maintaining economic growth and employment opportunities. Establishing hydrogen transportation, storage and use infrastructure will enable the transition to renewable sources of hydrogen production.

Saskatchewan’s renewable energy sources, like solar and wind, fluctuate and can’t always provide a consistent amount of energy. This means that there are periods of time when electricity generation capacity exceeds the demand (off-peak hours). Using this surplus energy to generate and store hydrogen could supplement renewable sources during generation lows.

SRC has worked on helping communities that rely on diesel generators gain access to more reliable and clean technologies with its hybrid energy containers. These containers use diesel power to charge a battery that then provides consistent electricity. Hydrogen, in combination with wind and solar energy generation, could be used to replace diesel and provide clean and reliable energy for these communities in the future.

“This is a global phenomenon,” says Pattison. “Hardly anyone was talking about hydrogen, but now the whole world is talking about it. I think that's really the only way to develop hydrogen—you need everybody talking and working together.”