Abandoned mine openings in northern Saskatchewan need closing, and here’s how we’re doing it

Strewn across the Athabasca Basin in northern Saskatchewan are 37 abandoned uranium mine sites, which are remnants of the uranium boom during the Cold War era. These sites are part of SRC’s multi-year remediation project, called Project CLEANS, which includes the Gunnar Mine Site, the Lorado Mill Site and 35 mine and exploration sites known as Satellite Sites (named as such because the ore extracted from these sites was shipped to regional mills for processing, including the Lorado Mine).

When many of these Satellite Sites were abandoned in the 1950s and 60s, openings to mine workings were left without proper closures and pose a risk to public safety. With the mines’ private owners long defunct, the responsibility for remediation shifts to the provincial government. But the challenge of closing the mine openings remains.

The Satellite Sites are in remote areas where construction resources are scarce, environmental conditions are tough and the window of opportunity for building is limited to a short field season during the summer. While few people are likely to wander into these abandoned sites by accident, local people, hunters and geologists are known to visit the sites, so the openings must be closed to protect public safety.

Mine openings in Saskatchewan have typically been closed with reinforced concrete bulkheads as this was the accepted method according to previous mine regulations. Access to many of these remote sites is limited to aircraft, boat or by ice road only, which makes transporting materials for a concrete bulkhead exceedingly expensive or impractical. By nature of their remoteness, alternative mine closures are needed.

SRC’s Environmental Remediation team has been working with local contractors and consulting engineers to design and build proper mine closures for these remote locations. While regulators have since accepted alternative closures other than reinforced concrete, there’s no one-size-fits-all solution.

Depending on the type of opening and the site conditions there are several methods SRC’s remediation experts have used at the Satellite Sites. In addition to meeting regulations, the right closure method must also be competitive in cost and service life, easy to transport and install, secure from unauthorized access and able to withstand forest fires.

Stainless steel caps satisfy the above criteria and have a long lifetime (hundreds of years), which make them ideal permanent closures for most vertical openings.

For horizontal openings, such as adits and portals, stainless steel grates are used as a functional equivalent with the added benefit of allowing water to discharge from the mine, preserving the closure’s integrity when mine water discharge is a concern. Sometimes bats will inhabit the inner mine workings and a special gate can be added to allow them to pass through. The gate thus provides a potential habitat for the endangered species that are on the federal Species at Risk Act list.

SRC started using stainless steel caps in 2009, although this method has been used in northern Saskatchewan since 2005. They are built off site and transported to mine openings by ice road where the segments are assembled and installed.

While this has proven more cost effective than concrete for remote applications, it has its drawbacks. Other than their unnatural aesthetics, stainless steel caps don’t work for openings where the local bedrock’s stability is questionable.

For relatively narrow openings where anchoring rocks are too unstable or a steel cap is at risk of being damaged by falling rock, a boulder closure method is an option. This requires locally sourced boulders of adequate size and the equipment to move them. But its beauty is in its simplicity.

Because of the specific conditions required, the boulder closure method is rarely used at the Satellite Sites. At one of the sites, the closure was constructed by placing large boulders side-by-side over the opening. This was then covered with smaller boulders and waste rock. Local soil was added as a final layer, and timber and branches were spread to promote natural revegetation.

The boulders selected were uncracked and angular to provide an interlocking fit, minimizing the closure’s erosion and degradation from repeated freezing and thawing.

For horizontal openings like adits and portals, which appear almost like small caves, the simplest solution is often the best. When local waste rock from the mine is present, the materials can be pushed and compacted back into the mine opening.

We found this option was occasionally superior to a concrete bulkhead as it blends with the terrain, requires minimal maintenance and reinforces the stability of the mine entrance. It also reduces the risk of exposure to naturally occurring radioactive material associated with the waste rock and inner mine workings.

Special design considerations are needed when water discharges are present, but the coarse nature of the backfill material allows a certain amount of groundwater to percolate through.

For vertical openings where information on the mine workings is limited and obstructions may be present (e.g., large debris was dumped in shafts and raises at some of the mines), this method is avoided.

Polyurethane foam is a quick and easy method for addressing immediate public safety concerns. It is a relatively inexpensive closure to install, easy to ship in boxes and is built by mixing two compounds on site and pouring it in the opening. A vent pipe is installed to allow venting from the mine workings, and soil is used to cover and protect the foam from forest fires and ultraviolet radiation.

Polyurethane foam is an acceptable long-term closure method for abandoned mine sites on federal land in northern Canada. However, its relatively short life expectancy—roughly 30 years—is significantly less than more expensive but durable methods, such as stainless steel caps. The cost of replacing polyurethane foam closures over a 150-year period, particularly for remote locations where access is limited, diminishes its effectiveness in the long term.

Some mine openings are like icebergs in that what you see is only a tiny part of the immense structure beneath. While a mine opening may appear no bigger than a manhole, the ground you walk on to reach it may in fact be a ceiling layer of rock, otherwise known as a crown pillar, covering a large void or stope that can be several metres wide and deep. 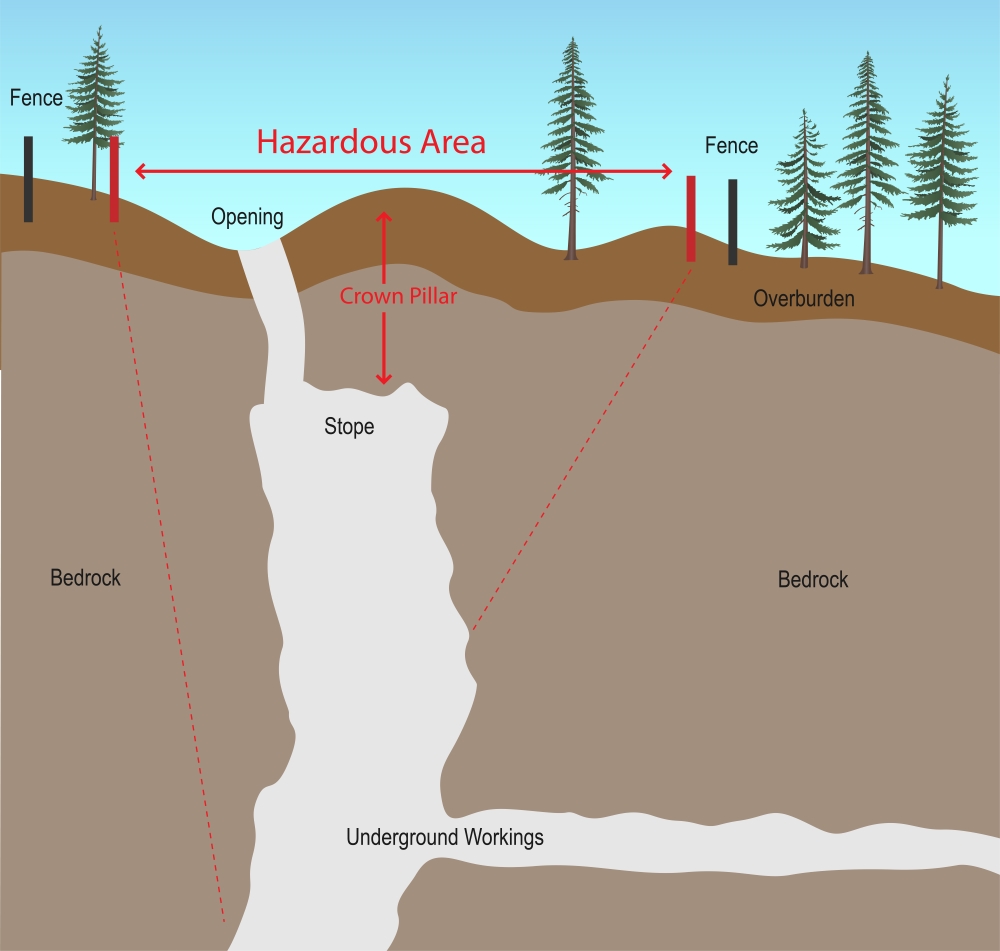 The risk of thin crown pillars collapsing poses a hazard to the public as well as work crews, impeding the ability to build a proper closure. The solution, though imperfect, is to fence off the hazardous area.

The ideal goal of our work is to install permanent closures on each opening with a life cycle of 150 years or more. These long-term closures most effectively protect public safety and require minimal routine maintenance.

Ultimately, once the public safety risks and environmental concerns are addressed adequately and the sites are stable, the sites are transferred to the provincial Institutional Control Program for long-term maintenance and monitoring. So far, SRC has applied for the transfer of six Satellite Sites to the program.