This blog post is based on the book, "The Nicholson Mine. Saskatchewan’s First Cold War Uranium Mine" co-written by Dr. Laurier Schramm and Patty Ogilvie-Evans.

In the early 1930s, prospectors discovered mineable deposits of Canadian uranium minerals in the Beaverlodge region near Lake Athabasca in northern Saskatchewan. Uranium wasn’t much more than a curiosity at that time, but it became instantly valuable when the 1939 discovery of nuclear fission and its massive energy-producing potential led to an international atomic energy race.

The worldwide search for uranium caused a resurgence in northern Canadian mineral exploration through the 1940s. In the early 1950s, many uranium mines were developed in northern Saskatchewan.

This era is rich in stories, involving a high-stakes treasure hunt in a remote, northern wilderness, and the secrecy, intrigue, and urgency of the Cold War, plus adventures and hardships of all kinds. Although there were many failures, a few remarkable successes were born out of a combination of hard work, good fortune, creativity, and dogged persistence. The results made Canada one of the world’s largest sources of uranium.

One such story is that of the Nicholson Mine, whose history began much earlier than the Cold War. 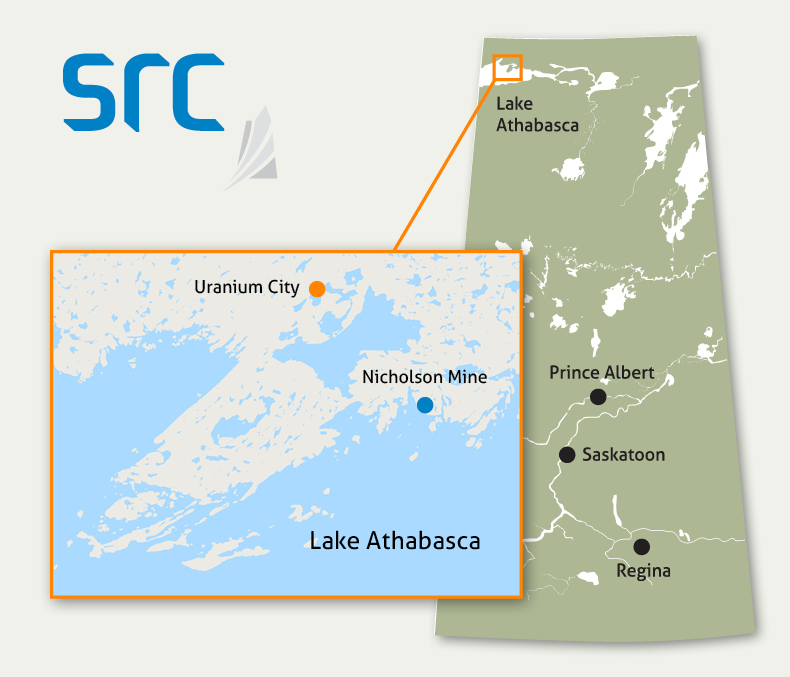 As part of his exploratory survey of the Lake Athabasca area in 1893, Joseph B. Tyrrell noted the occurrence of iron-rich hills and sediments in the Fish Hook Bay area. The small bay area that would eventually become known as “Nicholson” was first prospected and staked for iron in 1920. The original prospectors’ hopes for an iron mine were dashed by subsequent development work showing that the iron deposits were below commercial grade and not worth developing.

The area was not abandoned for long, however. John D. Nicholson had just retired from the Royal North West Mounted Police and become manager of Mineral Belt Locators Syndicate. Nicholson sent a crew to the site in 1929 to re-stake it. This time, they were looking for base metals. They found nickel, uranium, and copper minerals there between 1929 and 1930.

Nicholson’s discovery looked interesting, but his timing was bad, as it coincided with the North American slump in the capital markets. As a result, he was unable to raise enough money to properly develop the property.

In 1933, gold was discovered in nearby Lodge Bay. This discovery prompted Nicholson to prospect his site for gold, which he found in 1935, along with more of the relatively uninteresting uranium and nickel minerals. Abandoning his interest in the copper, he incorporated J.D. Nicholson Mines Ltd. in 1936 to develop the claims for gold (the company was later renamed Nicholson Mines Ltd.).

Preparing to develop the site for trenching and diamond drilling was not a simple matter, however. Being in a remote location, and without road access, the company would attempt to order a year’s worth of construction and other supplies prior to the beginning of each boat/barge season and hope to get everything delivered before winter freeze-up.

Nicholson didn’t know it yet, but the uranium would make the venture fourth-time lucky.

The Nicholson Mine Finally Succeeds

Nicholson’s discovery of uranium was the first in the Lake Athabasca region, and indeed the first in Saskatchewan.

In 1948, Nicholson Mines sent a test shipment of material to the Eldorado refinery at Port Hope, Ontario. The results were encouraging, and Nicholson Mines started shipping shaft-sinking equipment and supplies over the frozen Lake Athabasca during the winter of 1948-49.

The Nicholson Mine was finally about to become a real mine!

Apart from the mine buildings, the campsite included a bunkhouse and at least four other residences, cookhouse, auxiliary power house, food warehouse and refrigeration unit, dry storage building, washhouse, and a steam-bath house. In his autobiography, prospector Ted Kennedy provides a description of the Nicholson camp as experienced by himself, his wife Celia, and their three children in January of 1959:

We moved … to a small house at Nicholson. A kitchen, bathroom, living room and bedroom downstairs, with two small bedrooms upstairs, although one was filled with four 45-gallon water drums which we pumped full from the lake once or twice a week ... It’s cold in the winter in that country, and that winter was no exception. It got to be 60 below on a few nights and 50 below was common.

In 1949, the Nicholson mine was the first uranium mine to be developed in Saskatchewan and was the only active uranium mine in Canada outside of the Northwest Territories.

By 1954, Nicholson Mines (now Consolidated Nicholson Mines Ltd.) had obtained a contract for the sale of uranium ore to Eldorado Mining and Refining Ltd. and made its first shipments. They would mine and stockpile the ore during the summer and fall, waiting for the lake to freeze, and then truck the ore 24 km (15 miles) across Lake Athabasca to the Eldorado mill near Uranium City.

The Nicholson mine’s uranium production only lasted three years, as by 1956 their contract with Eldorado had expired, and the price of uranium had fallen too low for Nicholson’s production to remain economic.

The lull in production lasted until 1958 when the KLK Mining Company (including Ted Kennedy) obtained a lease on the Nicholson deposit and attempted to mine the highest-grade remnants that had been left behind. Between 1958 and 1959, KLK extracted about 1,800 tonnes (2,000 tons) of uranium ore, averaging 0.5% (as uranium oxide), and shipped it over the winter ice to Eldorado for milling. This was difficult and expensive work, however, and in his autobiography Kennedy wrote:

That lasted a year until we went broke, [Eldorado] wouldn’t take our ore any more.

The reason Eldorado stopped buying uranium ore was that, in 1959, the markets for uranium collapsed when the United States and United Kingdom stopped stockpiling uranium.

At intervals over the next several decades, Consolidated Nicholson (which went through a series of corporate changes, including name changes) continued to explore on the Nicholson site, but none of these latter-day exploration efforts proved successful and the mine and campsite fell into disrepair.

After all mining operations ceased in 1959, the Nicholson campsite was abandoned, the workings were flooded, and most of the equipment was removed.

Although relatively short-lived, the Nicholson mine had played its role in helping Canada become one of the largest uranium producers in the world. It produced about 12,800 tonnes of uranium ore, yielding about 50 tonnes of uranium oxide, and it left behind a legacy of abandoned structures, workings, and machinery, plus as much as 90-thousand cubic metres of waste rock.

The mine was never reopened. The headframe and buildings were left standing but abandoned, and there were a number of openings and exposures, including the main shaft itself. In this state, the site remained remote and relatively untouched for the next thirty years.

Between 1989 and 1991, Saskatchewan Environment stepped in to take some post-closure steps, including sealing the main shaft, two other open shafts, five adits, and removing the headframe.

By the early 2000s, the many mine and campsite buildings had seriously deteriorated and were beginning to collapse, exposing potentially hazardous radiation and asbestos.

Orphaned or abandoned mines are of particular concern because they represent closed mines whose owner no longer exists, can’t be located, or is unable to carry out remediation. In Canada, responsibility for the remediation of such mines reverts to government (“the Crown”). It has been estimated that there are about 10,000 such mine sites in Canada.

In 2006, the Governments of Saskatchewan and Canada signed a Memorandum of Agreement (MOA) to proceed with the decommissioning and reclamation of 37 Cold War legacy uranium mine and mill sites in northern Saskatchewan, which included the remediation of the large Gunnar and Lorado sites, and the Consolidated Nicholson mine and campsite, among others. SRC was contracted as project manager and designated agent to manage and perform the required environmental assessment requirements and rehabilitation activities. These activities, although in their early stages, are now underway.

Several years of clean-up activity are anticipated at the Nicholson Mine, followed by a period of monitoring activity, before the site is expected to be released into the Saskatchewan Government’s long-term management and monitoring program.