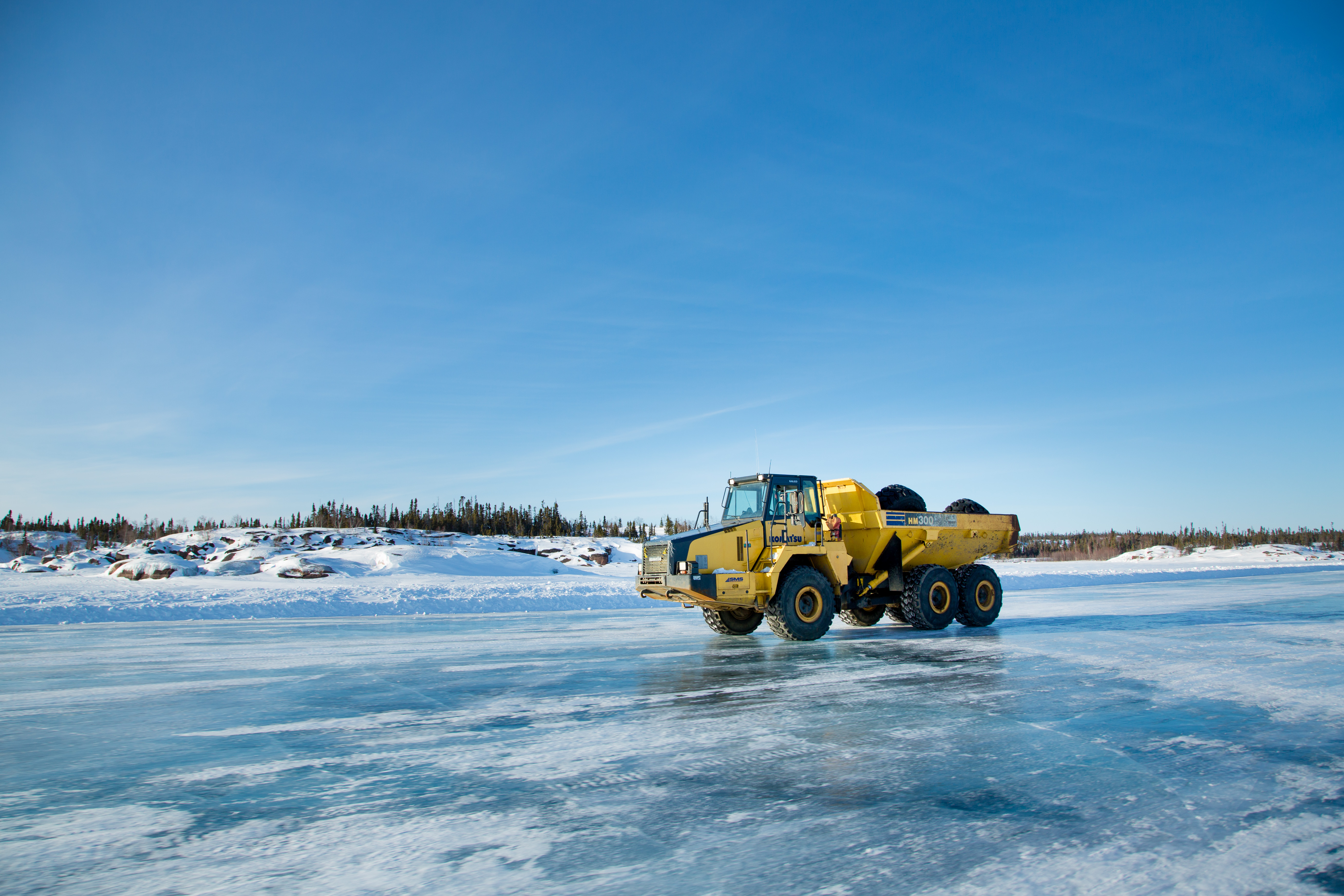 There is often a need in the mining industry for mines to be constructed in cold regions of Canada, such as those in northern Saskatchewan, Nunavut, the Yukon or the Northwest Territories. The large-scale movement of bulk building materials, supplies and equipment can be cost-prohibitive or even impossible. Some mechanisms of transport, such as a barge, can only be used based on the proximity of their locations and the availability of ports for docking, while air transport is costly and difficult with large items.

Driving on traditional routes (if they exist and are available based on seasonality) may involve travelling a significantly longer distance to a construction site, such as around a large lake rather than across it. When the transportation of supplies is necessary in cold climates or regions, ice roads may provide a useful mechanism for travelling to the site.

How are ice roads used?

We construct and maintain an ice road that extends off the provincially maintained ice road. Approximately 45 kilometres in length, the ice road provides access to the abandoned Gunnar Uranium Mine and Mill Site.

The ice road is used to transport a variety of items to SRC's remediation camp, such as vehicles, machinery, equipment, materials and fuel. Last year, over one million litres of diesel was successfully delivered to the camp for use in heavy equipment and camp operations.

The ice road itself is typically built at the end of February and used through March. At the end of March, the provincial ice road closes and SRC follows the same regulations and requirements as the government.

In our experience, there are opportunities to work with local contractors and sub-contractors in the Athabasca Basin region, which is beneficial for multiple reasons. Safety is the priority when building and maintaining an ice road, particularly on Lake Athabasca with its many islands and currents. Northern residents have the expertise, knowledge and understanding of the water currents and their locations and know where to build ice roads, while prioritizing safety. Hiring locally provides opportunities to maximize capacity building in the north via employment and skill development for residents in the region.

how an ice road is built

When building an ice road, measuring the thickness of the ice and determining the ratio between white ice and blue ice is critical for knowing the weight bearing for the road. White ice typically has air bubbles trapped inside, which makes it weaker than blue ice. As a result, certain sections of the road may be open to a maximum, medium or minimum weight load. SRC follows the provincial government’s regulatory framework in determining threshold limits for its ice road.

As the temperature drops and the bodies of water freeze, the ice builds itself naturally. To maximize this effect, the roads are continuously plowed with a path up to 45 metres wide. Since snow acts as an insulator, it needs to be removed to expose the ice to the freezing temperatures. If the ice is thin in certain locations, holes are drilled into it and water pumps are used to flood and reinforce the ice.

Road maintenance is often dependent on local conditions. One of the biggest challenges is dealing with cracks that form pressure ridges, which result from fluctuating water levels and weather conditions. The ice loses its uniformity, edges of ice sheets are formed between grounded and floating ice, creating a safety hazard.

In these cases, it is best to be prepared in advance by knowing these risks and planning for the need to possibly change the route in a safe manner. Follow preexisting procedures like the Saskatchewan Ministry of Highways and Infrastructure Winter Roads Handbook also helps to mitigate these and other hazards.

To maintain control, a driver needs to proceed slowly enough to be able to stop, turn and navigate effectively. Having enough knowledge, equipment and preparedness can make a significant difference in managing complications if they happen. To date, not a single safety incident has occurred on our ice road.

When construction-based projects are in development in cold climates, such as in northern regions of Canada, ice roads may provide a feasible and economic way to transport bulk materials to remote locations.