A Decade of Data: Climate Station at the Conservation Learning Centre Turns Ten 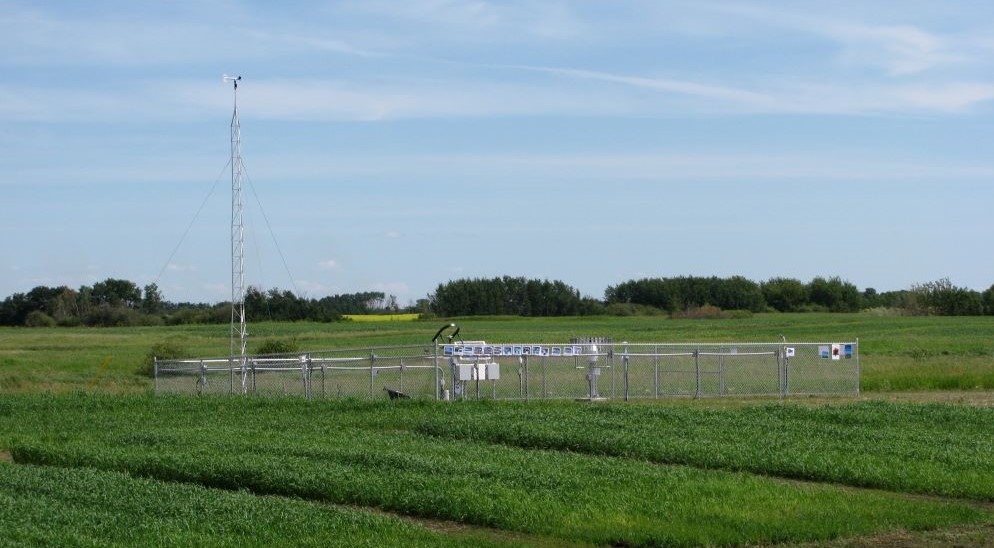 What is climate? According to Virginia Wittrock, Research Scientist at the Saskatchewan Research Council, climate is defined as “what we expect the weather to be, based on past experience or information.”

SRC has two high-caliber climate reference stations. They were established to track Saskatchewan’s evolving climate over the long term. Our two sites collect a variety of data including standard temperature and precipitation, but also lesser measured but equally important information like bright sunshine, global radiation, soil moisture, snow depth and others on an hourly and daily basis.

Data must be accurately documented, quality checked and described. This information assists in realizing new technological opportunities and social changes in many industries, such as agriculture, forestry, water and resource management, as well as health, transportation and many more.

Setting up the New Site

In the early 1960s, SRC established its first principal climatological station in Saskatoon. The Climate Reference Station (CRS) at the Conservation Learning Centre (CLC) was established in the summer of 2011 and became fully operational in January 2012.

The two sites have the same instruments and observations but there are some differences. The CLC station, located about 20-km southeast of Prince Albert, Sask., is run completely off-grid, meaning power is obtained through solar radiation and the data communication is carried out through cell service.

Finding a home for a new weather station can be difficult as it needs to incorporate both the landowners’ requirements plus the landscape. For example, if there are a lot of sloughs in the region, determining where to place equipment is an important factor.

The current site at the Conservation Learning Centre was a viable location because the water levels in a distant slough were very low. After the site was set up, there were a couple of years with high precipitation and at one point, the water in the once distant slough rose quite high and began encroaching on the established CRS. This was a concern as the 300-cm soil temperature sensors may have been sitting in saturated soil, which wasn't ideal for proper equipment functionality. However, the equipment continued to run properly, and the site has continued to function correctly at the Conservation Learning Centre.

Wittrock knew with Saskatchewan’s extreme climate that a new design was needed. SRC engineers designed the automated diffuse ring so it would operate in below -40 C and above 40 C.

Also, based on a client’s need, we designed a program that sends out email alerts from the CLC when there are extreme rainfall events. This has many potential applications, such as assisting with an early warning system when there’s potential for flooding in the region in real time.

Many industries, governments and organizations in Saskatchewan rely on the data obtained from our climate stations, such as the agricultural community, mining and energy sectors, the Water Security Agency, local government and consulting firms, as well as researchers and students. Provincial agencies have used the information from our CRS at the CLC to assist in their fire-potential codes.

Celebrating 10 Years and Beyond

Climate data is important to not only understand the current conditions, but also to track historic climatic changes.

Passing its 10-year milestone, our climate station at CLC is now considered a good site by industry standards and allows SRC to report 10-year averages in its annual reporting. With this important data piece, climatologists can create trends and compare current year events to what has occurred in the past.

For example, as shown in Figure 1 and 2, certain months (July) in 2021 were exceptionally dry and hot when compared to the 10-year average. While a climate station needs a minimum of 30 years of data to start reporting ‘normals’, our Saskatoon Climate Reference Station is sitting at the 58-year mark.

This post was written by former SRC employee Erin Shawaga.