Six metres below the floor of SRC Environmental Analytical Laboratories, you'll find a Safe Low-Power Kritical Experiment, or SLOWPOKE-2, nuclear research reactor set into the concrete floor of our lab. 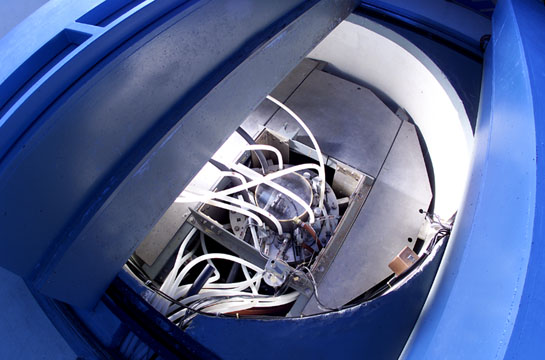 SRC is home to one of five SLOWPOKE-2 low-power research reactors in the world. What started out as a hole in the ground thirty-four years ago at SRC Environmental Analytical Laboratories is now a thriving, successful and valuable nuclear reactor with over 18,641 hours of commercial and research operation, 180 megawatt hours of thermal energy released and around 250,000 tests completed. While the ultimate authority for SLOWPOKE-2 lies with SRC’s CEO, day-to-day operations are overseen by a Facility Administrator. As the current Administrator, I’ve been involved with, and certified by the Canadian Nuclear Safety Commission (CNSC) to operate, the reactor for 28 years.

People often ask, “What’s the difference between a SLOWPOKE-2 research reactor and a typical CANDU power reactor?” Here’s one way to think about it: in terms of size and power, the SLOWPOKE-2 could be compared to a scooter – small, safe and ideally suited for its purpose.  The CANDU is more like a Ferrari – large, complex and powerful. The SLOWPOKE-2 produces a maximum 20 kilowatts of power, as opposed to as much as 800 megawatts of power produced by a CANDU reactor.

As the name suggests, the SLOWPOKE-2 is extremely low-power and while it has a variety of functions, it is used primarily as an analytical tool for commercial analysis and for research. The SLOWPOKE-2 uses neutrons to analyze and determine uranium concentrations. Users of our reactor come from a variety of places and industries, such as mining, oil and gas, and environmental and health sciences.  For instance, when mining companies explore for potential mine sites they use our reactor to analyze samples for uranium concentrations. The reactor also helps with environmental remediation work by testing oils, sludge and water samples for organic halides. These potentially harmful pollutants include chemicals such as polychlorinated biphenyls (PCBs). It’s critical to know if waste materials contain these contaminants in order to establish a safe, effective disposal method and prevent them from leaching into the environment.

Along with providing economical multi-elemental neutron activation analysis services to clients and multidisciplinary research projects, we also use the reactor to:

Of the five active SLOWPOKE-2 reactors in the world, four are located in Canada and one in Jamaica. SRC’s reactor is the only one not operated by a university. While heavily focused on the commercial side, SRC’s reactor still fuels knowledge in much the same way as the others.

There are numerous areas of research benefiting from neutron activation analysis:

SRC’s SLOWPOKE-2 reactor has been operating safely and without incident since its commissioning in 1981 and is licensed by the Canadian Nuclear Safety Commission.