“Innovation Insight” is a blog series written by SRC’s President Emeritus, Dr. Laurier Schramm, which aims to shed light on the importance of innovation in driving economic, societal and environmental growth. This is the fifth story in a sub-series about SRC’s evolution over the past 70 years.

It was very natural that Canada’s research and technology organizations (RTOs), as they came into being early in the 20th century, would become interested in the economic impacts of their work.

By the end of the century, better tools were being developed. A pioneer in this area was the Alberta Research Council (ARC) of the late 1990s. By the early 2000s, SRC had picked up where ARC left off by adopting, adapting, and then extending the original ARC approach.

SRC’s work has demonstrated that a combination of overall impact assessments and specific case studies can provide insights into the economic and social value, and return on investment, of effective applied research and development (R&D) programs.

SRC’s approach involves an R&D impact assessment tool that can be conducted annually, and relies on “the voice of the customer” to provide inputs that can be aggregated and scaled-up. This assessment can be used to provide conservative annual estimates of R&D return on investment. By continuing to make annual assessments since its original adoption in 2002-03, we have also been able to follow trends and to calculate cumulative impacts. 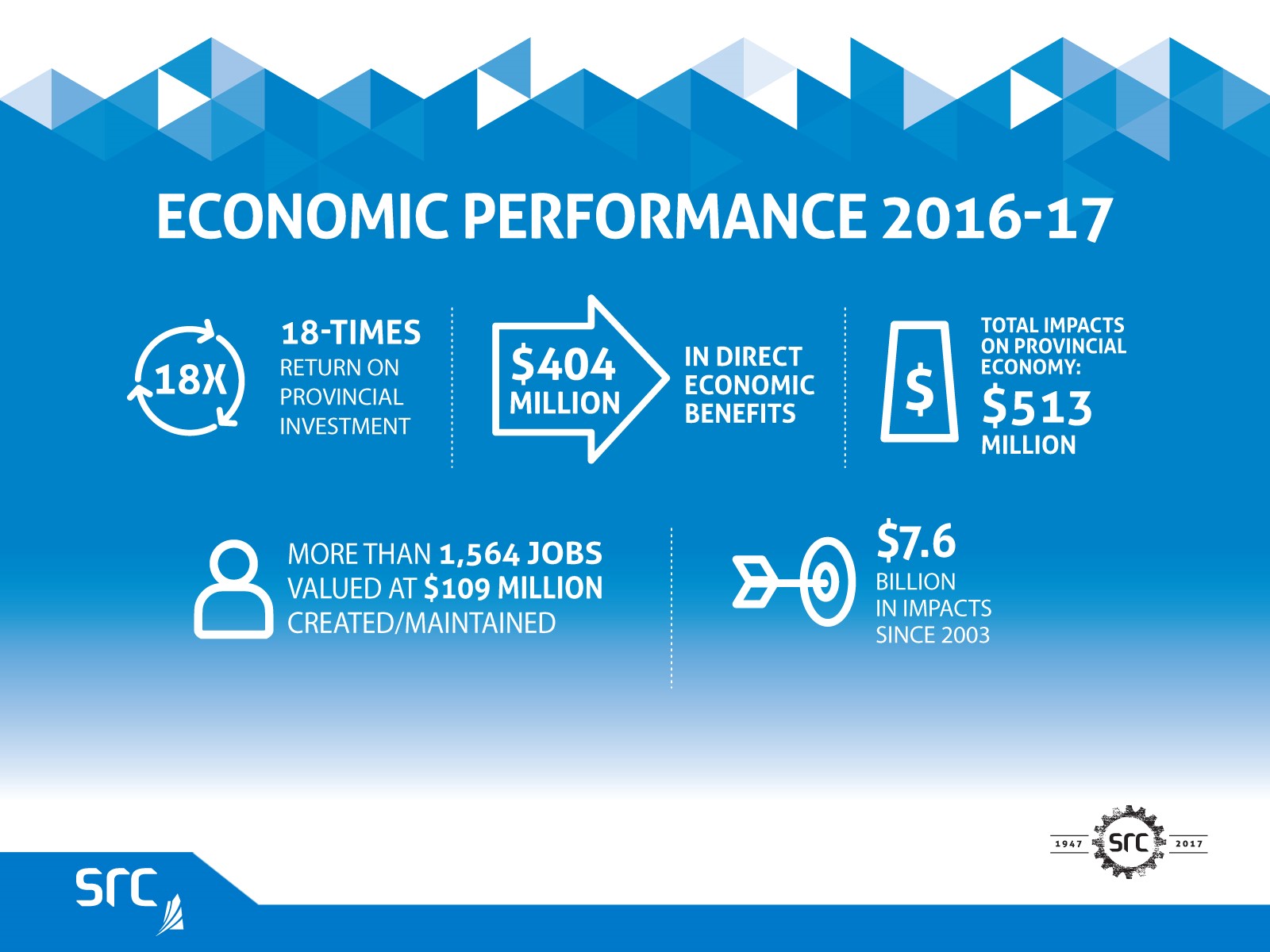 For the most recent fiscal year, 2016-17, SRC’s direct impact on Saskatchewan’s economy was more than $404 million. SRC also assisted in the creation or maintenance of more than 1,564 Saskatchewan jobs, worth another $109 million. SRC’s cumulative economic impacts from 2003 through 2017 now come to over $7.6 billion in economic and employment impacts in Saskatchewan.

SRC’s Mandate Effectiveness Ratio (MER, also referred to as mission effectiveness), is the leverage that SRC creates in the province with the government’s base annual investment (i.e., the ‘base funding’ provided by the province, distinct from specific R&D contracts). MER is simply SRC’s annual incremental economic impact divided by the government’s annual ‘base funding’ investment in SRC.

Between 2003 and 2017, SRC’s mandate effectiveness ranged from a low of 18 to a high of 46, with an average of about 31. This means that for every $1.00 the government invested in SRC, its work contributed an average return on investment of at least $31 of growth in the Saskatchewan economy.

In addition to direct economic and job-creation benefits, many of the projects SRC works on achieve positive non-financial impacts like environmental, sustainability, and other social benefits (including human and animal health and safety).

Such impacts are extremely difficult to quantify but are still very important, so SRC has also been attempting to account for at least some of these kinds of impacts of its work, since 2006.

In some areas, only examples can be provided due to the difficulty of quantifying the benefits, such as in improved air quality, water resources, health, and safety. In other areas, they can be quantified. For example, an “audit” basket of projects is examined each year to identify the amount of greenhouse gas (GHG) reductions and/or energy savings impacts from SRC projects. 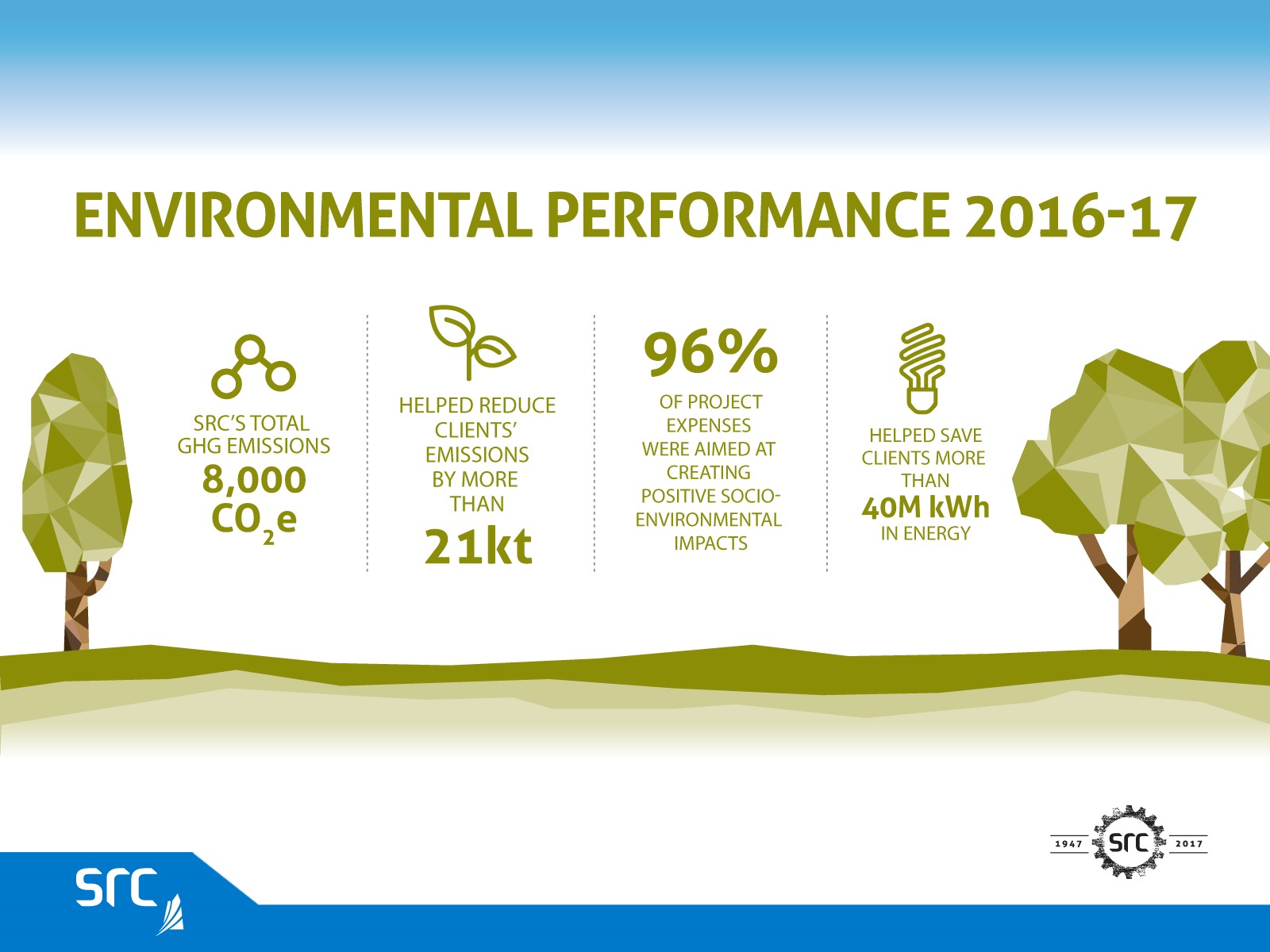 For the eleven-year period for which data is available (2006-07 through 2016-17), SRC conducted over $300 million worth of R&D projects, contributing socio-environmental impacts that include, among other things:

The above economic and socio-environmental impacts refer only to SRC’s impacts within Saskatchewan, and don’t count the value of SRC’s impacts in other provinces and territories, or in other countries.

Such broader impacts exist, as reported by SRC’s clients, ranging from enabling the development of pipeline slurry hydrotransport for Alberta’s mineable oil sands, to developing enhanced oil recovery process improvements for oil producers in the United States, to assisting with international diamond exploration.

A very conservative estimate of SRC’s incremental economic impacts in Saskatchewan over its first 70 years is $7.6 billion. All of us at SRC are now working creatively and diligently with our clients, to realize the next $8 billion for our province.