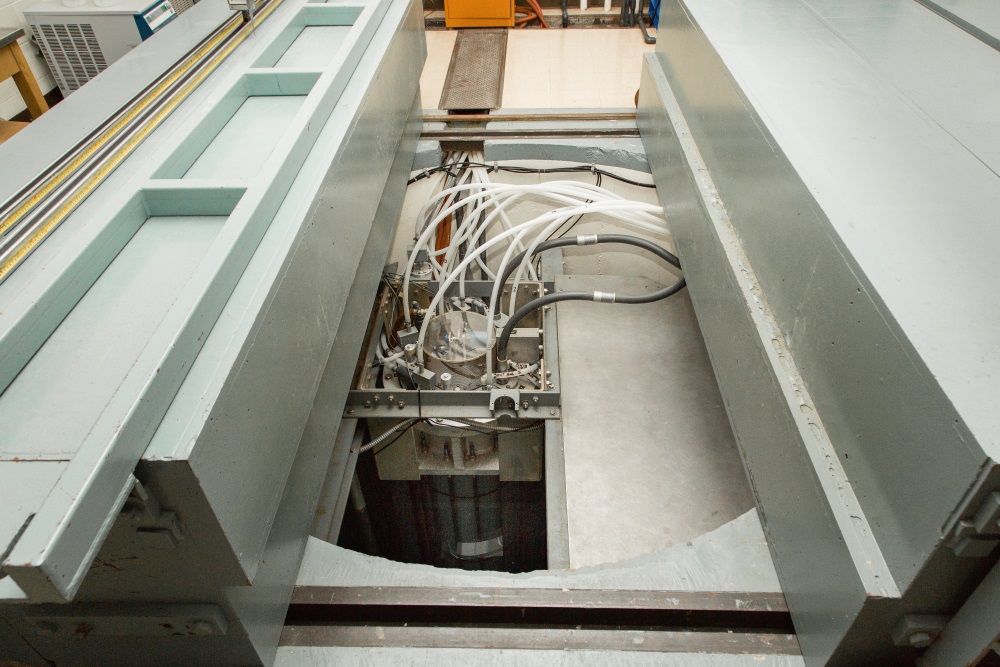 As governments across the globe currently consider how small modular reactors (SMRs) and nuclear energy will potentially power our future, reactors of the past may provide some insights into how to move forward both safely and sustainably.

The SLOWPOKE-2 (acronym for Safe LOW-POwer Kritical Experiment) nuclear research reactor is one of these. It is a low-energy, tank-in-pool-type reactor that is both inherently safe and extremely small. Surrounded by a protective barrier, the core itself is the size of a soccer ball.

The principle of operation of a nuclear reactor is nuclear fission—the process by which a heavy atom such as uranium-235 (235U) splits into smaller fragments, releasing neutrons and energy in the process. The neutrons released by one atom interact with other 235U atoms, causing them to split, which in turn releases more neutrons and energy, and so on, resulting in a self-sustaining chain reaction.

Where did the SLOWPOKE originate?

The concept of the SLOWPOKE originated in a paper from the Los Alamos National Laboratory, which explored the smallest mass of 235U that could be configured to sustain a chain reaction. Inspired by this paper, Dr. John Hilborn of Atomic Energy of Canada (AECL), went on to design the SLOWPOKE reactor in the late 1960’s.

The first commercial example began in 1971 at AECL's Commercial Products Division in Ottawa. Between 1976 and 1985, eight SLOWPOKE-2 reactors were commissioned in seven Canadian cities and in Kingston, Jamaica.

SLOWPOKE is an inherently safe system because the heat it produces limits its reactivity so it can never go out of control.

Its low power, with a maximum of 20 kW, means it cannot be used as a power generator, but it does produce a steady, stable stream of neutrons that can be used for a wide range of applications, including neutron activation analysis and isotope production.

How did a SLOWPOKE end up at SRC?

SRC housed one of Canada’s SLOWPOKE-2 reactors from 1981-2019. In the late 1970s, three separate events came together—the uranium industry in Saskatchewan was growing, SRC was looking to build a new facility for its analytical laboratory and AECL was promoting the SLOWPOKE to universities and research establishments.

At that time, Dr. Gene Smithson, the director of SRC Environmental Analytical Laboratories, recognized how a nuclear reactor in Saskatchewan would be a good fit with the growing uranium industry and the role SRC could play in bringing the idea to fruition. In 1980, a new building was constructed to house both the new analytical lab and a SLOWPOKE reactor.

SRC’s SLOWPOKE reactor was commissioned in March 1981 and the first commercial sample was processed shortly after on March 25, 1981. The reactor immediately proved to be a great resource for the uranium industry as it provided a rapid method to analyze the thousands of exploration samples that the industry was then producing. 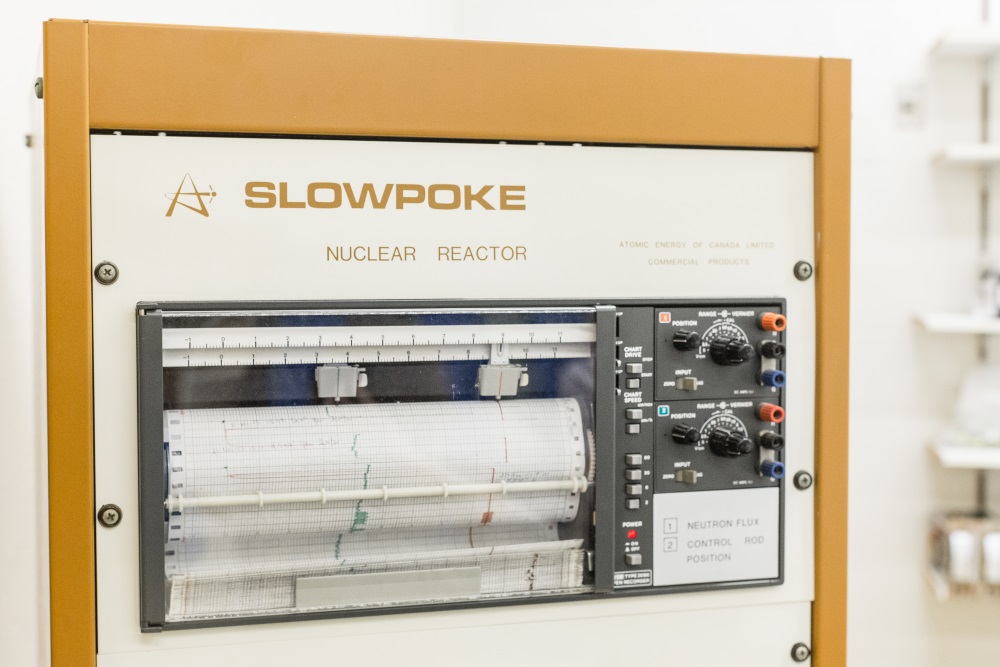 The analysis technique utilized by the SLOWPOKE had the advantage of not requiring any sample preparation beyond drying and grinding. Additionally, solids did not have to be dissolved with various acids, as they did with other analysis techniques.

The initial few years after commissioning were the busiest for SRC’s SLOWPOKE with over 22,000 samples analyzed in the first two years of operation. A slowdown in exploration in subsequent years meant fewer samples for uranium analysis.

New applications for the SLOWPOKE emerge

The lab then began analyzing samples for other elements using a technique known as instrumental neutron activation analysis (NAA). Most common analytical techniques require that the sample be dissolved or digested into a liquid medium for analysis. NAA, however, is a non-destructive technique, so it was the method of choice for the analysis of materials that were difficult to put into solution.

As an added benefit, samples could be returned to the client following analysis, if desired. For example, an archaeologist may want an old shard of pottery analyzed, but also want to retain it for their collection.

Many elements can be detected by NAA, from rare earth elements to precious metals. Over the years, eager prospectors, hoping to find gold or other valuable commodities, would bring their samples to SRC to be analyzed using fire assay—a technique that involves extensive sample preparation.

If those results came back negative and the prospector was interested in a second opinion, they would then be directed to the SLOWPOKE where the sample would only have to be ground prior to analysis. NAA was able to detect the presence of even a few nanograms of gold or other commodity, so prospectors would have a definitive answer on their sample.

In later years, one of the main uses of the reactor was for the rapid and inexpensive analysis of oilfield waste and other environmentally sensitive materials for halogenated organic compounds – for example, chlorine, bromine, or iodine bound to hydrocarbons and other compounds. The concentration of these compounds affects how waste is handled and disposed of. The ability to determine their presence or absence for little cost was of great benefit to industry clients.

One of the unique uses of the reactor was to produce tracer diamonds for use in recovering diamonds from kimberlite—a process optimized by SRC Geoanalytical Laboratories. When irradiated, industrial diamonds change color from relatively colorless to green or steel grey. A known number of these irradiated diamonds would then be added to the kimberlite ore at the start of a recovery process and the fraction of the tracer diamonds recovered at the end of the process was proportional to the fraction of diamonds that were originally present in the kimberlite.

While most of the analyses performed by SRC’s SLOWPOKE were fairly routine, occasionally a strange request came in. On one occasion, the lab was asked to analyze some glass chips that a client had allegedly nearly ingested and compare them to the analysis of glass from a well-known fast food establishment’s mug. On another occasion, an army widow requested that her deceased husband’s ashes be analyzed for depleted uranium to determine if he’d been exposed to that substance during his tour(s) of duty.

Why was SRC’s SLOWPOKE decommissioned?

As time went on, new methods to dissolve materials that were previously considered insoluble became available. This, along with advances in technology, led to analytical methods that could be performed more quickly and to lower detection limits. These newer technologies were faster and more economical than NAA.

As such, NAA fell out of favour and was gradually replaced by the new methods. By the early 2000s, use of the SLOWPOKE was limited to a few different tests and fewer samples for each test. The total number of irradiations performed per year dropped from a peak of over 11,000 to about 4,000.

However, occasional use by faculty and students from the University of Saskatchewan for teaching purposes and student projects, as well as the production of isotopes for research purposes, helped to extend the usefulness of the reactor.

By the early 2010s, SRC neared a decision point in terms of the SLOWPOKE’s future. It had been operating for over 30 years on its original fuel and the fuel was nearing the end of its useful life. It would soon be necessary to either refuel the reactor or decommission it.

By 2015, plans were also being made to move SRC Environmental Analytical Laboratories into a new facility. After thorough consideration of all factors, the decision was made to decommission the reactor. The reactor operated for its final time on April 30, 2019.

Decommissioning commenced in July 2019 and is expected to be complete in 2021. Four more of Canada’s SLOWPOKE-2 reactors have also been decommissioned: University of Toronto (2001), University of Alberta (2018), Dalhousie University (2011) and MDS Nordion (formerly AECL) in Kanata, Ontario (1992). Additionally, Polytechnique Montreal refuelled in 1997.

Tests that were previously done using the SLOWPOKE at SRC were replaced by either existing methods or new capabilities acquired by the lab. Uranium, thorium and other metal analyses are done by ICP-MS and organic halide analysis is now done by combustion and microcoulombic titration.

Safety and the SLOWPOKE

Safety has always been an over-riding priority for SRC and its work with the SLOWPOKE was no different. SRC’s SLOWPOKE operated trouble free over its 38-year history. SLOWPOKEs were a popular choice in the 1970s due to their high levels of safety. Its design is fail-safe and does not require an active mechanical safety system. Heat produced by the reactor limits its reactivity and operation. In addition, there are several auxiliary safety shut-down systems in place to keep employees and the facility safe.

The ALARA principle, to keep radiation exposure As Low As Reasonably Achievable, is the guiding principle behind radiation safety. Operations were conducted under the umbrella of SRC’s Occupational Health & Safety and radiation safety policies, as well as regulations set forth by the Canadian Nuclear Safety Commission (CNSC) and its predecessor, the Atomic Energy Control Board.

By operating under these policies and regulations, radiation, contamination and exposure levels were kept to non-detectable or nearly non-detectable levels throughout the lifetime of the reactor. At no time were regulatory limits or action levels approached. 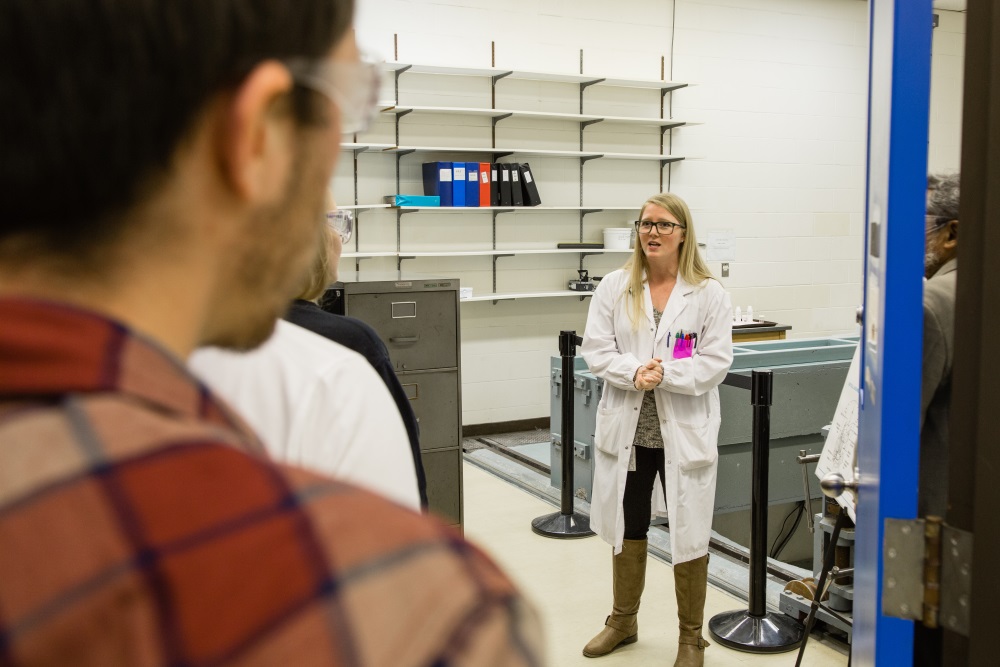 Over the lifetime of the SLOWPOKE, there were eight certified operators and 47 authorized users. These employees were specially trained to work with the SLOWPOKE nuclear reactor. Certified operators are legally permitted to operate the reactor, prepare and irradiate samples, perform routine maintenance, perform basic repairs to auxiliary systems outside the reactor container and other functions described in the supporting documents to the SLOWPOKE operating licence.

Authorized users are permitted to prepare and irradiate samples and may be asked to assist a certified operator with some of their duties.

Certified operators were trained in-house, using a standardized training program approved by the CNSC.  The program consisted of 14 modules. Each module consisted of classroom and on-the-job training. At the conclusion of each module, trainees demonstrated their understanding of the course material via a field checkout, performing reactor operations and answering oral questions.

At the conclusion of training, which typically took approximately one year to complete, a three-hour written exam was administered, on which a score of 90 per cent or better was required to pass. Results of the training program and exams were submitted to the CNSC who, upon approval of the training results, would then certify the candidate as an operator.

Authorized users were also trained in-house, following a training program that included radiation safety and operation of irradiation systems. Authorized users were approved by the Chair of SRC’s internal SLOWPOKE Committee. Altogether, these employees operated SRC’s SLOWPOKE for a total of over 20,000 hours and irradiated almost 250,000 samples—the majority being for the uranium industry in Saskatchewan.

Where to from here?

While SRC’s SLOWPOKE-2 nuclear research reactor is no longer in operation and will soon be fully decommissioned, its legacy for Canada’s uranium nuclear industry can continue to be applied to emerging nuclear technology, such as small modular reactors (SMRs).

The Province of Saskatchewan, through its Growth Strategy, has committed to potentially using SMRs as an energy source to allow a greater mix of renewable and base-load power as the transition to a reduced carbon emission environment continues.

Saskatchewan is well-positioned to pilot both small- and large-scale small modular reactor projects and to provide any additional supporting work. Successfully pursuing this initiative requires the involvement of numerous players.

SRC is positioned to play a key role in this pursuit, with its many years of experience operating a nuclear reactor, pilot-level project development, field experience and lab support services.

Our strength lies in our ability to put technology on the ground using science as the base, working with industry, entrepreneurs and other government agencies as partners and science service providers. SRC has worked with provincial, federal and international governments on a variety of research projects in various components of the nuclear cycle.

We have laboratory/research infrastructure and human resource expertise to support multiple aspects of SMR research. We can and have partnered with universities to deliver applied research projects and training opportunities. As part of our applied research SMR programs, we attract and train staff in nuclear research and application.