CHOPS: but not for your BBQ

This article originally appeared in the Regina Leader-Post.

Billions of dollars lay in wait beneath Saskatchewan’s resourceful soils. These billions equate to an economic boost to the province, and for residents this means more funding for public services and infrastructure, reducing debt and saving for future expenses.

The billions of dollars we’re talking about are in the form of the 90 per cent of heavy oil that remains in the ground after the accessible oil has been removed using current well production technology. Heavy oil lives up to its name, with its consistency ranging from corn syrup to molasses. So why can’t we access that 90 per cent? It all comes down to science, geology and technology development.

Heavy oil is abundant in Saskatchewan and Alberta. There are thousands of wells to the northeast and southeast of Lloydminster, which produce heavy oil through a method called Cold Heavy Oil Production with Sand (CHOPS). CHOPS doesn’t require thermal input, such as steam, which is why it’s considered “cold.” Due to the nature of the reservoir rock, large quantities of sand are produced with the oil.

For the last 15-20 years, CHOPS has been applied to heavy oil reservoirs in Saskatchewan. It is based on Progressive Cavity Pumping (PCP), a major innovation in pump technology, and a significant improvement to technology that had been applied since the 1930s. PCP allows better draw on the wells (stronger suction), dramatically increasing the withdrawal of oil from the reservoir.

Wormholes: a help and a hindrance

The plot now gets as thick and murky as the oil itself. In drawing down harder on the well, the sand that makes up the reservoir is also brought to the surface with the oil. Rather than leaving large cavities around the bottom of the well, the sand is produced from the formation in the shape of long, thin holes, called “wormholes,” that radiate away in all directions from the bottom of the well. These wormholes can be hundreds of meters long, but are only about two centimetres in diameter.

Wormholes allow CHOPS wells to produce more oil faster from the reservoir. They also ultimately represent the weakness of CHOPS technology. While wormholes provide rapid access to approximately 10 per cent of the oil, unfortunately they also very effectively bypass the remaining 90 per cent of the oil in place. (Tweet that!)

CHOPs produces thousands of barrels of heavy oil per day for Saskatchewan, and millions of barrels per year, providing tremendous economic benefits. Prior to CHOPS, wells produced only about two to three per cent of available oil. By applying CHOPS, we’ve increased the amount of oil that can be removed by up to 7-14 per cent. It’s a significant improvement, but as we have seen, leaves 90 per cent of the oil in the reservoir untouched in the ground. 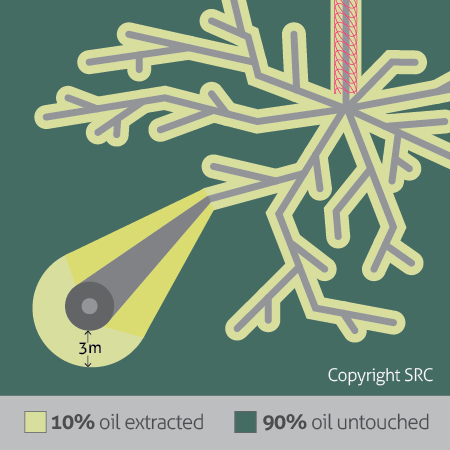 While CHOPS wells continue to be drilled in our province,  and as the existing wells mature, we’re in a situation in Saskatchewan where we’re starting to lose production from this valuable resource. This untouched oil represents hundreds of millions of barrels left untapped, and it’s worth billions of dollars in revenue to the province.

As a well declines in production, it comes to the end of its useful life. For example, where a well once produced 100 barrels per day, it’s now down to three barrels per day. When the well is no longer economically viable, the operator initially suspends the well for a period of time.  The province then requires the operator to permanently abandon the well,  preventing any future flow to the surface. To abandon the well, the operator pumps cement down the well, permanently preventing production and eliminating any opportunity for future development. If we can address the issues in time, maturing wells represent an opportunity to deploy new technology into the reservoirs to recover the remaining oil.

The new wave of innovation for heavy oil in Saskatchewan lies with Post-CHOPS, which involves applying new technologies to get that last 90 per cent out. The successful application of Post-CHOPS will likely not come from one single technology, but from a mix of a few technologies.

We're raising awareness within the industry and government about the limited time available to address this market effectively and still gain from the existing wells. SRC is working with major operators who use CHOPS wells to help them develop, commercialize and promote Post-CHOP technologies. Time is ticking — if we wait much longer to develop and deploy new technologies, it might be too late, because many wells will have been permanently abandoned.