Celebrating 75 Years of Science and Technology with Mike Crabtree, SRC’s President and CEO 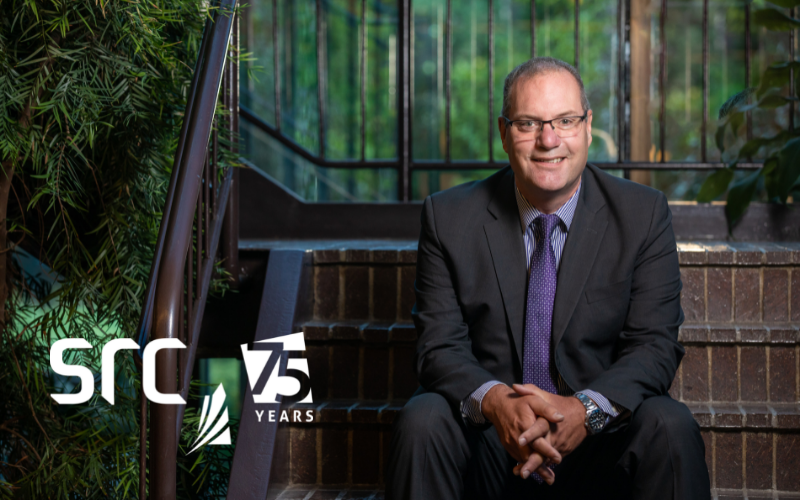 The year SRC came into existence, 1947, Canada’s population was 12.6 million people. It’s now about 38 million. Smartphones would not be invented for another nearly 50 years. No one had heard of, or even considered, the impacts of global warming. In the coming decades, we’d see the rise of air travel, computers, globalization, the internet, electric cars and artificial intelligence.

Never in human history had we seen so much technological, environmental and societal change over such a short period of time.

SRC has played a role in helping Saskatchewan adapt, develop and thrive in the face of these changes, and continues to play a central role in the province's energy, resource and agricultural sectors of the province.

2022 marks SRC's 75th anniversary and it’s fitting that diamonds and gold are the “recommended” anniversary gifts as we’re building our capacity in both those commodities and others to support sustainable resource development in Saskatchewan and beyond. (It’s safe to say we’re more interested in analyzing and processing these minerals, so if you want to send us a gift, we’d like your samples.)

As SRC steadily marches through its 75th year of operation in Saskatchewan, we had a chance to sit down with SRC’s President and CEO, Mike Crabtree, to reflect on key moments in SRC’s history that shaped the organization it has become. Crabtree also gives us some insight into what the future holds for Canada’s second largest research and technology organization.

What makes SRC stand out from other science and technology-based organizations?

Over SRC’s 75-year history, we’ve built an organization that not only serves the needs of many sectors, but also develops custom solutions for complex challenges. The reason for our broad scope is that we are focused on delivering value to the people and businesses of Saskatchewan, which, when you look at our economy, is very diverse—from agriculture to mining to oil and gas and renewable energy.

How has SRC managed to stay relevant all these years?

What has contributed to our longevity and success is maintaining relevance to our stakeholders, who are the Government of Saskatchewan and the people of Saskatchewan.

If we look back over the last 75 years, SRC has continuously focused on how to meet the immediate and near-future needs of the province: what are we delivering now versus what we need to deliver in the coming decades. SRC’s ability to evolve quickly to the province’s changing industrial and economic needs is a key strength.

For Saskatchewan, Canada and the world, the greatest challenge we face is climate change and the energy transition needed to reduce global carbon emissions to achieve net zero. A significant part of SRC’s efforts in the next 20 years will be supporting government and industry in meeting their net-zero goals.

Looking at the evolving list of services SRC provides, what role does specialized expertise play in keeping the organization at the forefront of new technologies?

SRC has developed a broad range of services that reflect the key resource sectors in Saskatchewan and beyond, such as mining, energy and biotechnology. The specialized expertise at SRC is what makes the services we offer one of a kind. Of the approximately 300 employees here, most of them are engineers, scientists and technicians across a variety of fields, but we also have business professionals who provide the necessary support to meet our clients’ needs.

Our strong performance through the uncertainty of these last few years reflects the fundamental strengths of SRC: the shear dedication of our employees, their ability to adapt quickly to change and their ingenuity in the face of unusual challenges.

Looking to the future, one area we are focused on at SRC is attracting more people to the province who work in areas such as artificial intelligence and data science and logistics. These skills are critical for us to support the province’s resource and midstream manufacturing development needs.

We've been successful in making SRC one of the best and safest places to work—not only in Saskatchewan, but also in Canada—by providing an engaging work experience that also supports a healthy work-life balance.

SRC has 1,500 clients in 27 countries around the world. In its 75 years, the organization has weathered all manner of economic and environmental challenges. How does this impact the services you offer to clients?

What clients need to know about working with SRC is that we are a flexible organization. We pride ourselves on being able to engage effectively with and meet the needs of different sizes of companies and organizations. We’ve worked on complex challenges with some of the largest corporations in the world and with startups that want to disrupt industry and make a difference.

Our ability to understand what a client needs and deliver the solution in a cost-effective and efficient manner has contributed not only to SRC’s success over the years, but also to our clients’ successes.

What excites you about SRC’s future?

SRC is now the second largest research and technology organization in Canada, second only to the National Research Council. Our direct economic benefit to Saskatchewan’s economy is just under $900 million per year and in 2020-21, we supported and created 6,000 jobs. SRC delivers significant value, not only to Saskatchewan, but to all of Canada.

We’re exploring and developing several large-scale, industrial and resource-based projects that are relevant to Saskatchewan’s growth on the global stage. One example of this is SRC’s Rare Earth Processing Facility, which will be the first facility of its kind in Canada and lay the foundation for a rare earth element (REE) supply chain in Saskatchewan, as well as form an industry model for future commercial REE resource expansion in the province.

In nuclear, SRC is working with Westinghouse Electric Company (WEC) to advance very Small Modular Reactors (vSMRs), also known as micro-reactors, in Saskatchewan. WEC and SRC are taking a stage-gated approach on the development and implementation of a strategy to introduce a first-of-a-kind eVinci SMR and the development of its key commercial and Industrial applications to Saskatchewan.

SRC is committed to operating at the forefront of new technology to drive these industries forward. Our experts can bridge the gap between the fundamental research needed for development and industry commercialization. We’re positioned to be a key research and technology provider for the province to achieve its economic, environmental and social goals, now and in the future, which will provide benefits to the country and the world for generations to come.