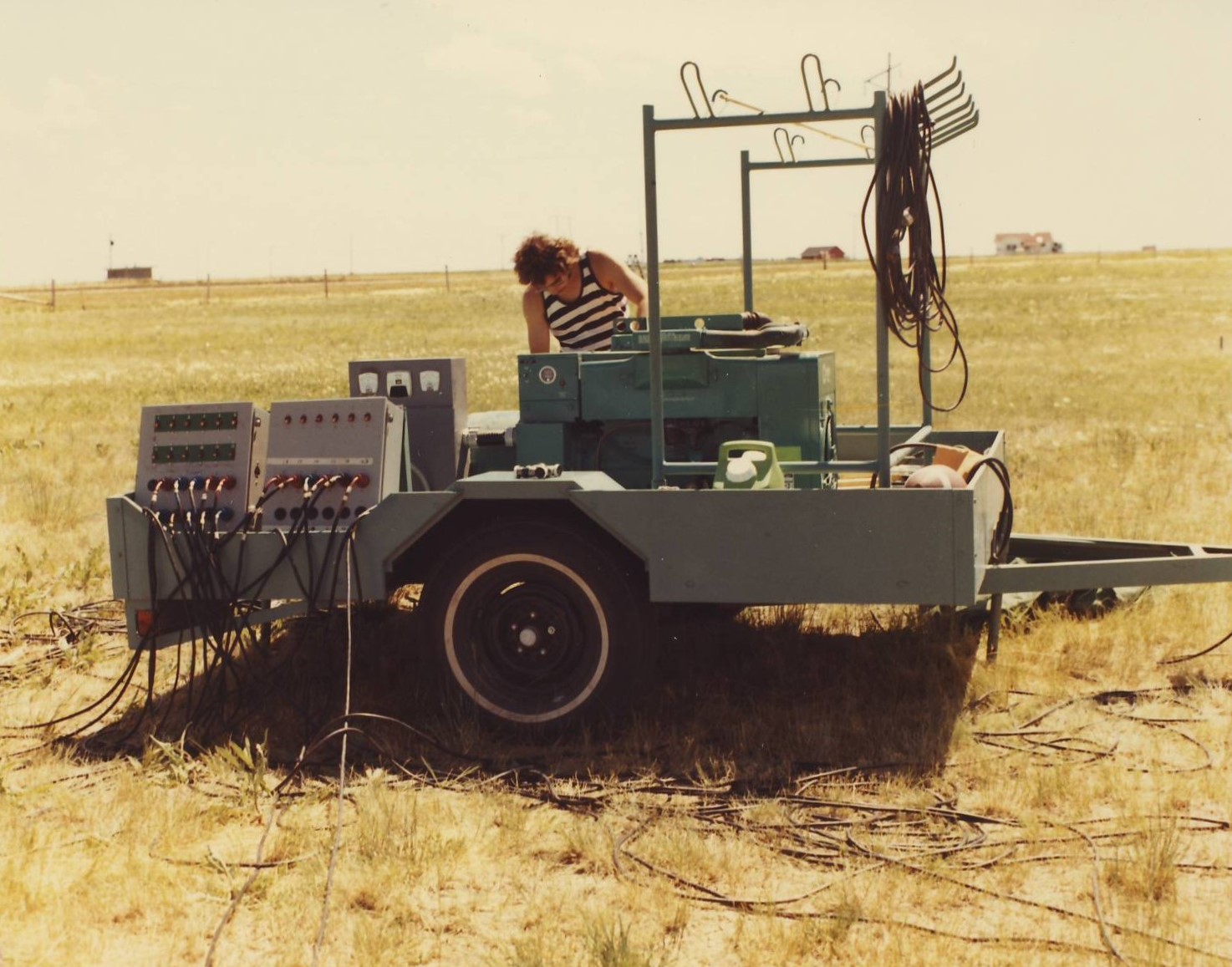 This blog post was written by Andrew Downing, a former SRC employee.

Agriculture has always been, and continues to be, one of Saskatchewan’s largest industries. Did you know that in 2016, Saskatchewan’s agricultural land comprised over 46 per cent of Canada’s national field crop area?

Given that agriculture is in our roots, it’s no surprise that SRC’s history includes a variety of ag-based research projects: from practical solutions for traditional agriculture, to developing new laboratory services for industry and conducting field trials, to evaluating different farming methods.

Throughout the 1970s, we investigated pesticide spray drift, which happens when pesticides drift beyond the targeted crop area (including runoff from plants and soils) by accident. This can cause associated harmful effects on humans and the environment.

Whenever farmland is sprayed, nearby shelter beds, vegetable gardens and susceptible crops (e.g., rapeseed and sunflower) can be damaged by off-target drift. In the field trials, we studied how much drift occurs at different wind speeds and which nozzles, chemical solutions and sprayers would be ideal for reducing unwanted damage beyond the sprayed area.

We also assisted with trials to determine how farm workers can limit their exposure to pesticides and preserve their wellbeing.

Setting up the field trials

It was necessary to monitor the weather during these investigations, so we set up a mobile meteorological station upwind of the crop test area. This station measured wind speed, wind direction, air temperature and relative humidity. We then placed sampling devices at various heights: on the ground to measure the impact on the swath; on towers to monitor airborne contaminants; and at different distances downwind from the spraying.

Both tractor-drawn and aircraft sprayers were tested in the field trials. These were outfitted with twin boom systems (where the spraying equipment is mounted), to compare new techniques against the status quo.

One boom used a conventional setup and method, whereas the second one included various sprayer systems, nozzles and chemical solutions. Settings such as pressure, delivery rates and the spray angle were adjusted to determine optimal spraying techniques. The pesticide 2,4-D amine was used for both booms, but they were dyed distinct colours for easy identification.

Back to the lab

Once the field trials were complete, the sampling devices were taken back to the lab for analysis. After determining the amounts of 2,4-D amine in each sample, calculations were made to quantify the total spray deposit in the swath, on the ground just downwind of spraying and the fraction of it drifting off with the wind.

When it comes to pesticide spraying, a critical component is ensuring the safety and wellbeing of the work crews applying it. In 1980, we assisted Health and Welfare Canada, the Agriculture Canada Research Station and the University of Saskatchewan with field trials concerning workers’ exposure to pesticides during aircraft spraying operations.

As five crew members carried out their normal routines, they were outfitted with an air sampler (which measured the amount of 2,4-D inhaled) and 14 sample patches (which sampled the amount of exposure each worker received through contact on their cotton overalls and underneath them on their skin).

In this study, the crew consisted of a pilot, two flag people, a mixer and a water carrier. Each crew member was sampled for several days following the testing to monitor their exposure levels as their bodies flushed out the 2,4-D.

Based on the results of this collaborative study, these guidelines were determined to help control pesticide exposure:

The guidelines we assisted in developing in Saskatchewan during the 1980s have since been expanded upon by the agriculture industry and can be found in the Saskatchewan Government’s 2018 Guide to Crop Protection. It’s also important to check with government regulatory bodies for the latest information.

Although these projects were completed a few decades ago, they are relevant because agriculture continues to be one of Saskatchewan’s major industries and crops grown here and across the country have a significant impact on Canada’s economy and its role in global food production.

The next time you look out the window (from the ground or the air) at the waving fields of wheat, consider how projects like these contributed to more accurate pesticide spraying, which has improved safety for workers and reduced environmental impacts for the agriculture industry.