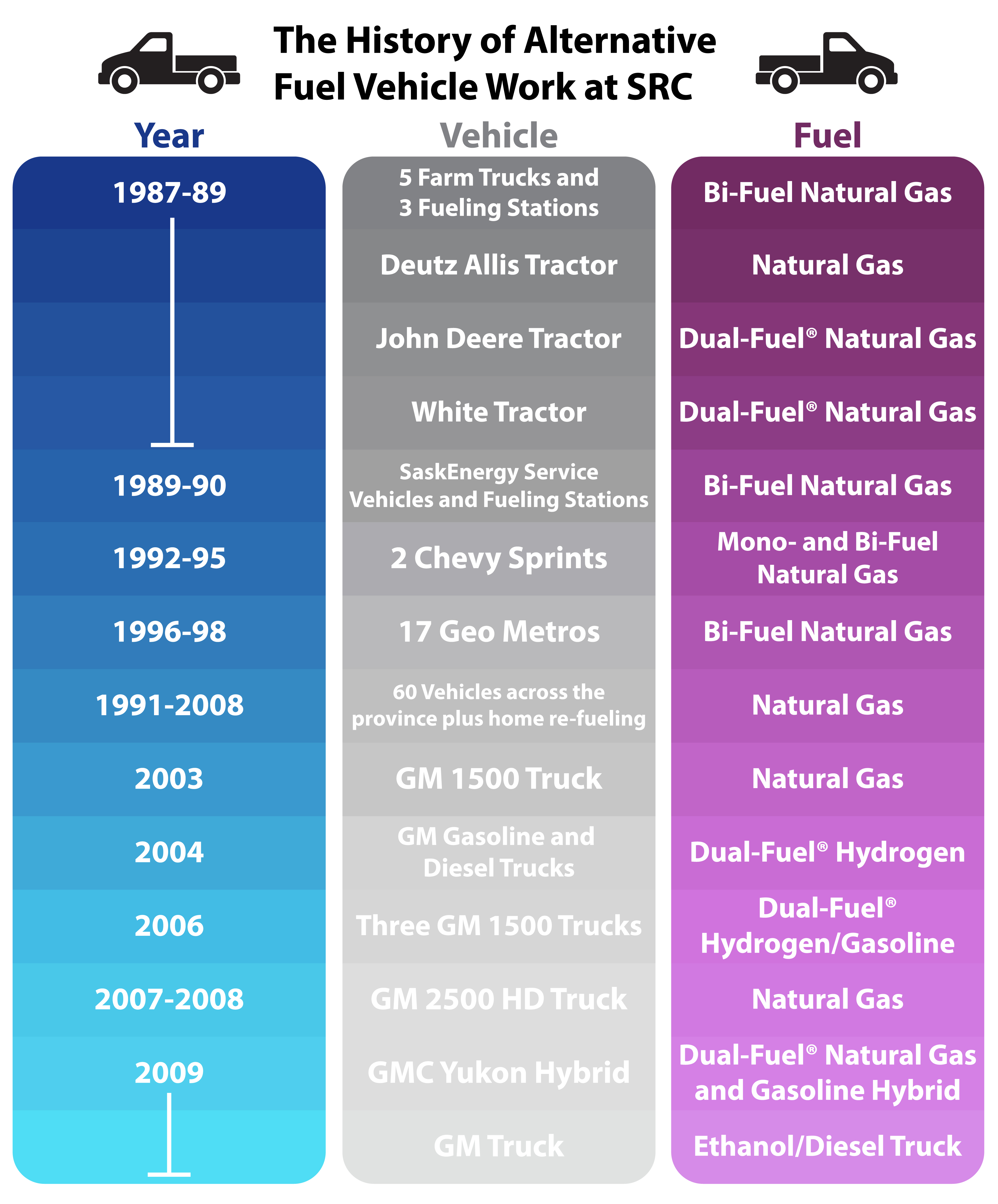 This blog post is the second installment in a two-part series about the history of alternative fuels vehicle work at SRC. In the first post, we looked at the work done in this area in the 1980s and 90s. In this second post, we’ll share an overview of the work done in the 2000s.

This ultimately led to the development of a series of demonstration vehicles that could operate on natural gas, ethanol or hydrogen. Many other vehicles were developed and demonstrated as after-market conversions. These vehicles were based on SRC’s Dual-Fuel™ intelligent systems concept: a vehicle could operate on its original fuel type or dynamically blend original plus alternative fuel (spanning the full range of 1 to 100 per cent substitution).

The Early 2000s: Expansion Was the Name of the Game

Alternative fuels really took off in early 2000 when SRC started phase one of a feasibility study for Saskatchewan-based Ecce Energy Corporation, which focused on the substitution of hydrogen for gasoline and diesel fuel in pickup trucks. A short time later in 2004, in a project funded by Natural Resources Canada (NRCan) and Ecce Energy, SRC unveilled the world’s first modified light-duty truck fuelled by a combination of hydrogen and diesel fuel.

SRC developed and applied its technology to power a standard vehicle’s engine with hydrogen and conventional fuels at the same time (dual-fuel). Depending on the load, it could run simultaneously on mixtures of hydrogen and diesel fuel in the range of 0 to 60 per cent substitution of hydrogen for diesel fuel. The truck could also operate on diesel fuel alone when hydrogen was not available.

Interested in learning more? Watch our webinar on Alternative Fuels and Vehicles.

The dual-fuel hydrogen/diesel fueling system was installed in a 2001 GMC 2500 HD Sierra pickup truck with a 6.6-L Duramax diesel engine. This type of pickup truck was chosen because it was a very popular model for commercial fleet applications. Additionally, these trucks tended to use a large amount of fuel, so their impact on the environment was greater than a smaller car. This gave SRC the opportunity to make an even greater environmental impact with its alternative fuel vehicle work.

The second phase of this project, in partnership with NRCan, involved developing a hydrogen/gasoline dual-fuel system. A 2006 Chevrolet 1500 pickup could run on combinations of hydrogen and gasoline simultaneously, or fully on gasoline. Under certain loading conditions, including idle, the hydrogen/gasoline truck could run on 100 per cent hydrogen.

The components for dual-fuel hydrogen were very similar to those used on natural gas vehicles. A high-pressure storage tank (5000 psi) was needed to contain the hydrogen, and a hydrogen regulator was required to reduce the pressure to about 50 psi before it was injected into the intake manifold of the engine.

The key component was the electronic control unit specially developed by SRC that controlled the time and quantity of hydrogen injected into the engine. The substitution rates of hydrogen for gasoline were 46 per cent in city driving and 42 per cent on the highway in the GMC 2500. As well, fuel economy was similar with gasoline and dual fuel for city and highway driving. However, driving range was a factor of four times higher on gasoline than dual fuel.

Emission tests showed that carbon dioxide (CO2) emissions were substantially reduced; however, the reduction was based on engine load and the level of hydrogen substitution. Note that the rate of hydrogen substitution is governed by engine load and the knock limit. At idle and low load, CO2 emissions were reduced by nearly 100 per cent and about 57 per cent, respectively. However, at medium load, the percentage reduction was 29 per cent and at high load it was a 14 per cent reduction.

There were also improvements in tailpipe emissions. Regulated emissions of carbon monoxide (CO), nitrogen oxides (NOx) and total hydrocarbon (THC) were reduced by 27 per cent, 21 per cent and 19 per cent, respectively.

Results for these demonstration vehicles showed that:

To obtain hydrogen fuel for the demonstration project, SRC engineers designed a system that took by-product hydrogen from ERCO Worldwide’s Saskatoon chemical production plant and transferred it through a short pipeline to a loading station at AkzoNobel’s nearby facility. There the hydrogen was dried, compressed and injected into tube trailers that made their way to SaskEnergy’s commercial fuelling station in Saskatoon where it was pumped into vehicles.

The station, located in Saskatoon’s north industrial district, fuelled a fleet of five hydrogen trucks from both SaskEnergy and SRC. These General Motors pickup trucks were converted to run on hydrogen by SRC between 2001 to 2008. Six were either 5.3-L or 6.0-L gasoline engines and the seventh was a 6.6-L diesel engine. SRC developed the fuelling systems and engine controllers for all seven vehicles, which allowed them to burn a blend of fossil fuel and hydrogen.

The initial project cost was $2.3 million with funding provided by NRCan, the Government of Saskatchewan, SaskEnergy and SRC.

SRC’s leading-edge work with alternative fuel vehicles truly demonstrated the ability of technologies that were commercially ready to improve fuel economies and reduce emissions, including greenhouse gas emissions, and paved the way for these technologies to be a real possibility in the future.

SRC is currently providing technical expertise on an electric vehicle car share program that is powered by 100 per cent solar energy. The program, managed by the Saskatchewan Environmental Society, has made four electric vehicles publicly accessible as part of the Saskatoon CarShare Co-operative fleet. SRC’s role is to capture and analyze a wide array of data from both the vehicles and charging stations to help assess how electric vehicles can best be utilized in a Saskatchewan context.

Whether the vehicles of the future are electric powered or powered by alternative fuels or something else completely, the leading-edge work SRC's experts have done in this area has paved the way for a more sustainable future.