Why is Water Quality Testing Important?

Easy access to clean drinking water is something Canadians often take for granted because of Canada's abundant water sources, from coast to coast. But there's a lot that goes into actually ensuring the water we drink is safe and clean, including testing. SRC Environmental Analytical Laboratories tests, on average each year, around 12,000 water samples from over 350 clients all over Saskatchewan. We’ve provided water quality testing to Saskatchewan municipalities and businesses, as well as homeowners and well owners for over 50 years. 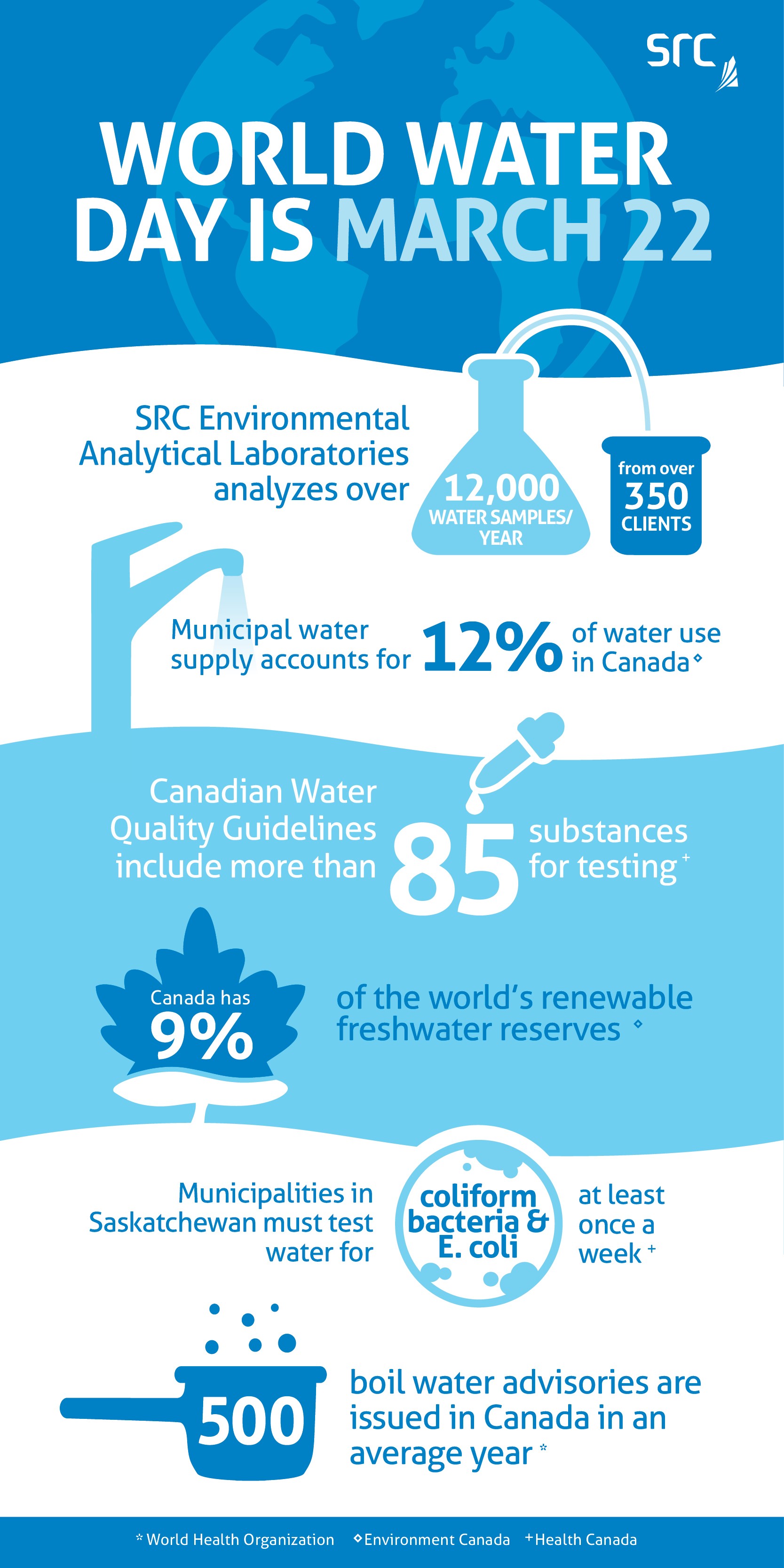 You’ve probably heard about, or maybe have even been affected by, a contaminated municipal water supply, either chemical or biological. When this occurs, residents typically are advised to take precautionary measures, such as boiling water before consuming or even using it for other purposes. In an average year, some 500 boil water advisories are issued in Canada with respect to municipal water supply services. Typically, these advisories are in place for a three-to-four day duration, but some stay in place for many years. Because we test a lot of municipal water supplies, SRC is often the first to identify that an advisory or order needs to be put in place. If these contaminates are not identified early on, disaster can strike.

Between 1974 and 1996, over 200 outbreaks of infectious disease associated with drinking water were reported to Health Canada. There were more than 8,000 confirmed cases linked to these outbreaks. In 2000, in Walkerton, Ontario, seven people died and 2,500 became ill due to waterborne pathogens in their drinking water. In 2001, a similar outbreak in North Battleford, Saskatchewan, caused by the protozoan Cryptosporidium, affected at least 5,800 people.

Federal, provincial and territorial governments have collaborated to develop voluntary Canadian Water Quality Guidelines, including for drinking water. These Guidelines help protect the health of Canadians by establishing maximum acceptable concentrations for substances found in water used for drinking. To date, guidelines have been established for more than 85 physical, chemical and biological attributes of water quality. The guidelines apply to all public and private drinking water supplies and to treated or finished water as it emerges from the tap. The provinces and territories use these guidelines when creating their own enforceable standards, objectives or guidelines.

In Saskatchewan, the Water Security Agency (WSA) and the Saskatchewan Ministry of Environment share responsibility for drinking water guidelines. Bacteriological determinations, particularly using total coliform bacteria as an indicator of the potential of pathogens, has been a standard monitoring tool for many years. There are minimum bacteriological monitoring requirements for surface and groundwater supplies, but typically monitoring requirements are related to the size of a population served by a distribution system. For example, larger municipalities may be required to test more frequently and possibly with a larger number of sampling locations. However, other factors could include the nature of the supply, its susceptibility to contamination and whether or not bacteria has been found in the water supply previously.

This routine bacteria testing is the most common water quality test that SRC does for drinking water. If the sample being tested is positive for bacteria, the results are immediately provided to the WSA and a boil water advisory is put in place. In order for a municipality or business to have that advisory lifted, results must show that two tests done 24 hours apart both come back negative.

From our vast rivers, lakes and oceans to your tap, there are many checks and balances along the way to ensure your water is safe to drink and use. Clean drinking water is something every person on the planet needs in order to stay healthy, so on World Water Day, March 22, pause before you sip that H20 and remember the journey it’s made to your glass.