Why are LED light bulbs the best? Find out. 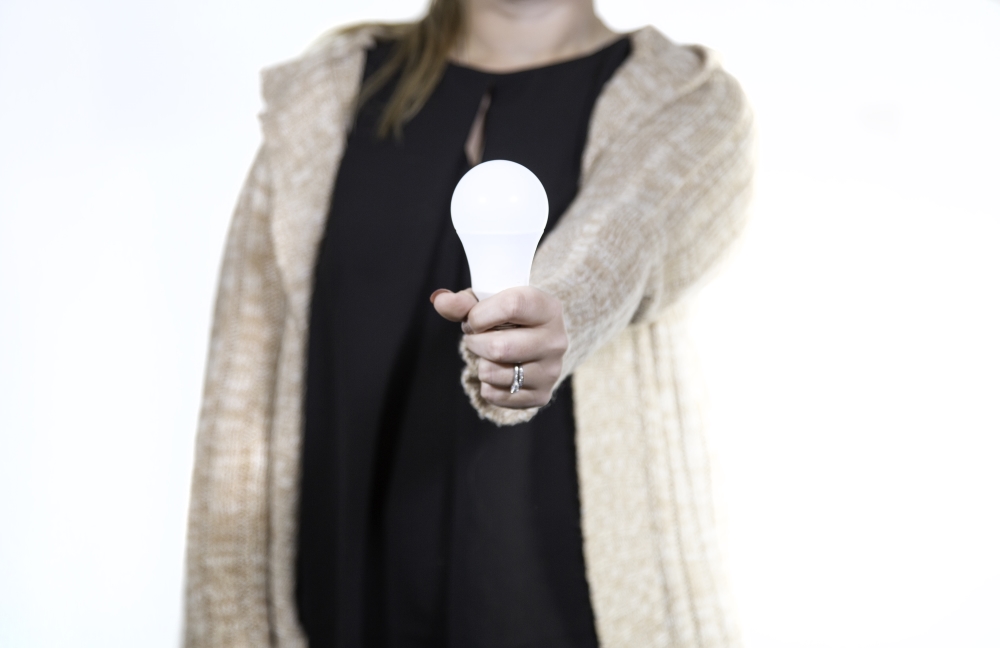 Did you know that lighting accounts for about one-third of an average home’s energy use? When I first read that number, I was shocked and quickly ran through my home turning off all the lights. Sitting in the dark all day is not ideal but choosing the right light bulb can both drastically reduce power bills and positively affect the environment. So, how do you know which bulb to use?

Buying a light bulb is not as simple as it used to be. There are more choices than ever when it comes to energy-efficient lighting options. For me, walking down the light bulb aisle at a store feels whelming with all the options and ratings to consider. Which one will last the longest? Which one is the most energy efficient? Which one is the most cost-effective in the long-term? Which is the brightest? And, what do all the numbers mean?

Due to advances in technology, there are really only a couple viable options. Incandescents – the light bulb that has been the main source of light for the past 200 years – are now known to be incredibly wasteful, as they convert the majority of their electricity into heat, rather than light. Compact Fluorescent Lights (CFLs), while more energy efficient than incandescents, contain toxic chemicals, including mercury, which can complicate their handling and disposal.

These light bulbs paved the way for Light Emitting Diodes (LEDs), which have become one of the most energy efficient and rapidly growing technologies. Here are seven reasons why you should consider switching to LEDs:

LEDs are well-known for being incredibly energy efficient. ENERGY STAR®-certified LEDs use only 20 to 25 per cent energy and last up to 25-times longer than the traditional incandescent bulbs they replace. Look for LEDs that are ENERGY STAR certified to ensure you are getting a high-quality product.

LEDs are substantially more “green” than their counterparts. A standard 10-watt LED, used in place of a 43-watt incandescent light bulb, saves roughly 800 kWh over its lifetime. On average, that single replacement will eliminate emissions of almost half a tonne (1000 pounds) of carbon dioxide, 0.002 tonnes (4-6 pounds) of sulfur dioxide and 8 mg of mercury.

On top of that, LEDs are 100 per cent recyclable. Incandescent and CFL bulbs contain toxic chemicals and cannot be recycled or disposed of in the normal manner.

Many people point out that the upfront cost for LEDs is more expensive than their counterparts. And while this is true, LEDs are so efficient they actually pay for themselves within a couple of years. This is because LEDs use at least 75 per cent less energy a different kind of bulb would use and they can last up to 25-times longer than incandescent lighting.

For example, it might cost $8 to light a space in your home with a traditional bulb, but it would cost $2 to light the same space with an LED. Clearly, the cost savings from switching to efficient light sources can result in a lower power bill.

As mentioned above, incandescent bulbs convert most of their electricity into heat, rather than light. This usually doesn’t present much of a problem, but it can still be a fire hazard or can lead to burns. Since LEDs use so much less electricity than other bulbs and convert it mostly into light, they stay cool to the touch, which reduces the risk of fire and/or burns.

Additionally, CFL bulbs are made with mercury, which requires more careful handling and disposal. Most LEDs are made from a safe semi-conducting material called gallium arsenide phosphide.

LEDs are known to be durable, reliable and the longest lasting light bulb on the market – some even last twice as long as CFLs.

Expected lifetime can be a particularly important consideration when selecting bulbs for those hard-to-reach fixtures, as well as areas that are used less frequently.

LEDs, unlike their counterparts, are known for their consistency.

Other bulbs may require a warm-up period when switched on and may begin to flicker over time, but LEDs will keep a space consistently illuminated. Additionally, with LED lighting, the color and brightness the bulb emits will be the same from the first time it turns on right until it expires.

And, good news for those of us in colder climates, LED bulbs can withstand even the most frigid of environments, ensuring consistent outdoor lighting even when the temperature drops.

For decades, light bulbs have been bought and sold according to wattage, but these numbers are quickly becoming outdated with the phase-out of incandescent bulbs. Thankfully, most manufacturers still label their halogen, CFL and LED bulbs with the equivalent incandescent wattage that we are all accustomed to — 40W, 60W, 75W and 100W.

In the future, it will be important to know how these different wattages translate in terms of light output (or lumens) as this will replace wattage as the key characteristic for identifying light bulbs.

With LEDs, the amount of wattage needed varies for each lumen rating. This is because some LED brands have created bulbs that offer more lumens for less wattage. For the greatest energy savings, ENERGY STAR recommends finding a selection of bulbs with the most lumens needed, and then choosing one with the lowest wattage. 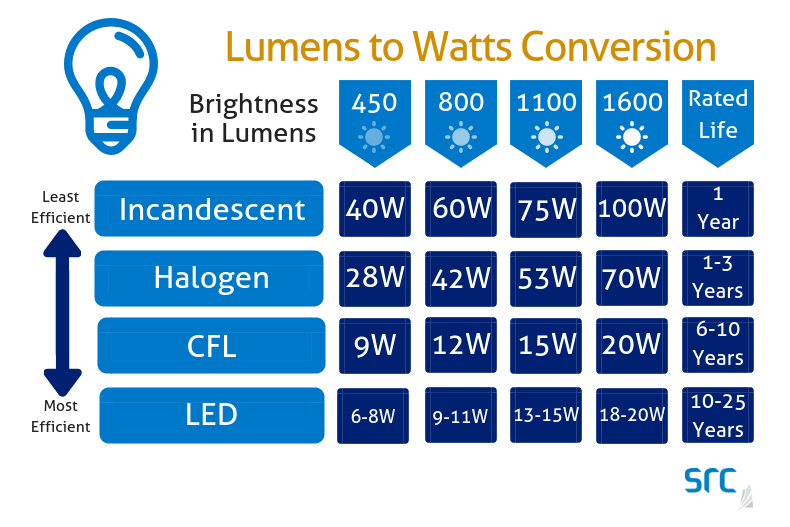 LED light bulbs are just one small decision you can make in your household that has a positive long-term impact both for the environment and your wallet. At SRC, we work on energy saving projects and technologies with industry, government and communities that reduce emissions and create positive impacts right here in Saskatchewan.

Together, we can teach future generations about the value of being good stewards of the environment.